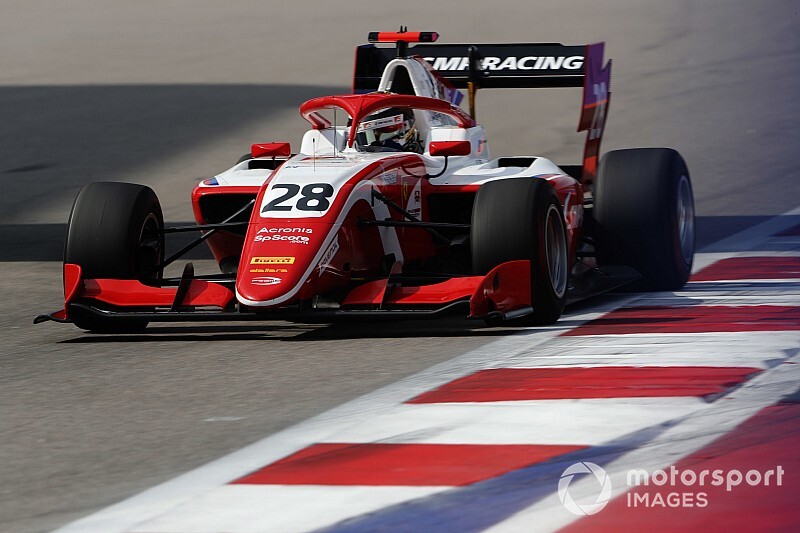 Armstrong made a strong getaway from third on the grid to get a run on polesitter Shwartzman, the former taking the lead at Turn 2, while Daruvala – who needed to win to keep his title hopes alive – fell back to fourth at the start and then fifth when he was passed by Leonardo Pulcini.

Rain complicated matters and while it wasn’t strong enough to require a change to wet tyres, it meant multiple drivers crashed and marred the first quarter of the race with virtual and full safety car periods.

Just before the halfway point following the full safety car, Niko Kari reeled in Armstrong and made his move to take the lead around the outside at Turn 13. Armstrong got back ahead one lap later at Turn 2 but locked up, falling back to third.

That gave Shwartzman second and the strong tow awarded by following the leader, and he made the most of it to claim the lead at Turn 2 with seven tours to go, and two laps later he cleared DRS range to Kari.

However it wasn’t over as Armstrong honed in on his rival, and a late lunge at Turn 2 on the last lap robbed his teammate Shwartzman of a win in front of his home crowd.

Second would have guaranteed Shwartzman the title regardless of the result of his only title rival Daruvala, but the latter could only finish fifth and over eight seconds adrift of his teammates.

With third, Kari equalled his best result of the year for Trident, while Red Bull junior Juri Vips took fourth on the road with a late move on Hitech Grand Prix teammate Pulcini.

A 10-second penalty for punting ART Grand Prix driver Christian Lundgaard just prior to a safety car restart however demoted Vips to eighth.

Behind Pulcini and Daruvala, Pedro Piquet joined his Trident teammate Kari in the top six, ahead of HWA’s Jake Hughes and Vips.

Raoul Hyman took his first points of the year for the Sauber Junior Team, with MP Motorsport’s Richard Verschoor rounding out the top 10.

Of the series debutants, Ralf Schumacher’s son David took 22nd after he was punted into a spin halfway through the race in his first F3 appearance for Campos Racing.

Jenzer’s Charles Leong crashed at Turn 2 to bring out the full safety car in the early stages.