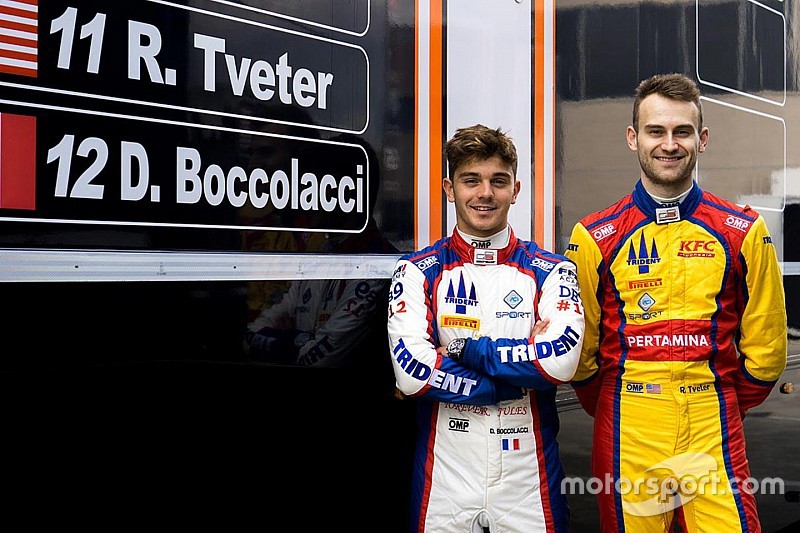 Dorian Boccolacci and Ryan Tveter will race for Trident in the 2017 GP3 season, completing the Italian squad’s four-strong line-up.

Boccolacci and Tveter extensively tested for Trident in pre-season testing, with the former topping the timesheets on two separate occasions.

Boccolacci, who finished second and third in last year’s Formula Renault 2.0 Eurocup and NEC championships and also notched a podium during a one-off EF Open appearance said: “I am extremely proud to have been chosen by Team Trident for the new GP3 Series season.

“It is a new and challenging series for me considering the high level of the competition.“

Tveter, meanwhile, switches to GP3 after two seasons in European F3, where he secured a best result of seventh.

“It's a fantastic opportunity to be racing with Trident for the 2017 GP3 season, and I'm especially proud and grateful to be joining the KFC and Pertamina supported squads alongside Giuliano in GP3.”

Trident team manager Giacomo Ricci added: “We are extremely pleased to announce our full line-up for the 2017 GP3 Series season with Dorian and Ryan joining Giuliano and Kevin in an highly-competitive roster.

“We have four extremely strong drivers and I’m sure they will work well together and provide the team with a great contribution in order to fight at the top of the pack, which is a tradition for Team Trident in this challenging championship.

Meanwhile, Marcos Siebert has confirmed on Twitter that he will be racing for Campos in the opening GP3 round in Barcelona.

*first round only
Next article

GP3 DRS restricted to fixed number of uses per race