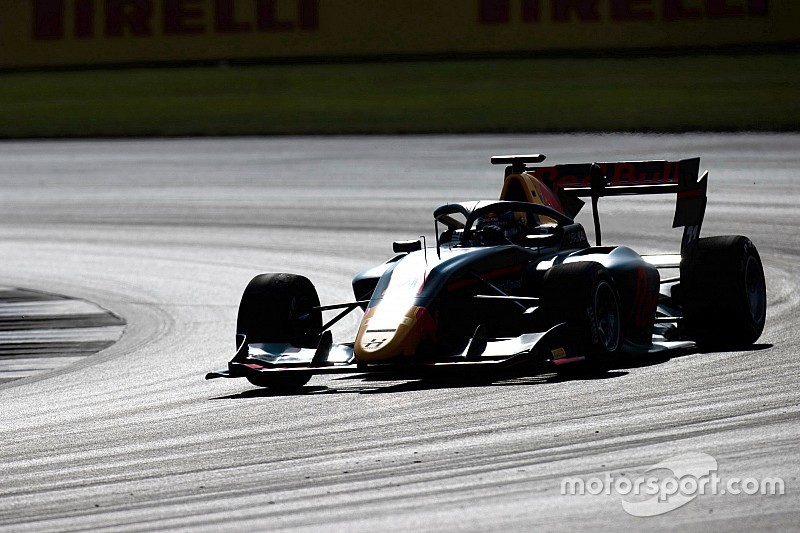 Red Bull Formula 1 junior Juri Vips delivered a first pole of the season for Hitech Grand Prix in one of the most exciting sessions of the Formula 3 season so far at Silverstone.

With 30 cars sparring for track position, there were a large number of late improvements, and by the end the top 28 wound up within 1.6 seconds of pole position.

Vips had topped the session on multiple occasions but the Austria race one winner was the last frontrunner across the line to set a 1m43.902s.

Ferrari junior Marcus Armstrong joined Vips on the front row of the grid for Saturday’s race.

The Prema driver was less than a tenth adrift, the only other driver to break the 1m44s threshold. He had run off the track one lap earlier joining the Wellington Straight and was lucky not to damage his car.

Jehan Daruvala made it two Prema cars in the top three, as one of a flurry of late improvers.

Christian Lundgaard – hamstrung in Austria after he and ART teammate teammate David Beckmann were disqualified from qualifying as their physios were deemed to be working on their cars in the pits by holding fans to a radiator duct – took fifth.

Robert Shwartzman took sixth and was the last of the Prema drivers. He had been second with just seconds on the clock remaining, but was one of many shuffled back by a host of late improvers.

In seventh, the youngest driver on the grid, Red Bull-backed Liam Lawson, made use of the alternate strategy running in the middle of the session for his best qualifying of the season so far with MP Motorsport.

Pedro Piquet took eighth for Trident, which had topped the session with less than a minute to go with Niko Kari who was shuffled all the way back to 12th.

Fabio Scherer was another shuffled back late on but is enjoying his best weekend yet with the Sauber Junior Team in ninth, while Yifei Ye took 10th but faces a five-place grid drop from the last round. That will promote HWA’s Jake Hughes, winner of race two in Austria, into the top 10.

The only new driver for this round, Jenzer's Federico Malvestiti, qualified 29th, 2.2 seconds slower than Vips.