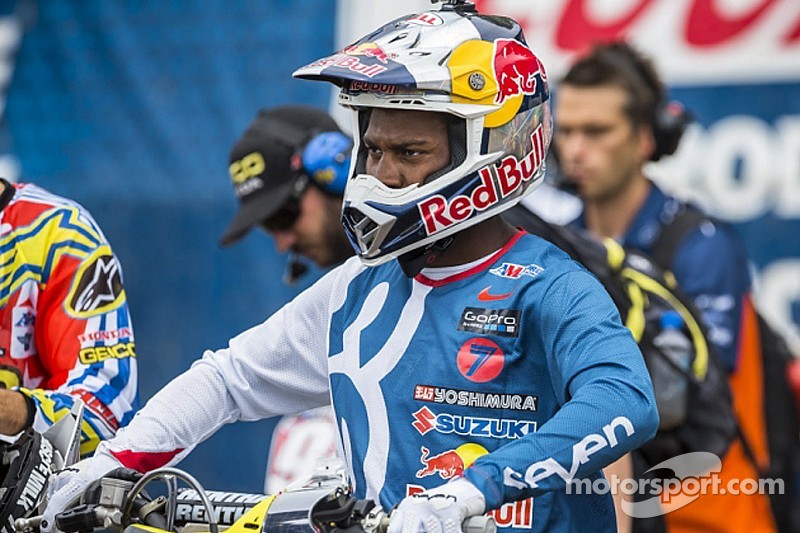 James Stewart is a three-time FIM World Supercross and two-time AMA Supercross champion, but he won't be winning any titles next year.

It's been confirmed that the iconic rider won't be taking part in either the AMA Supercross or outdoor National MX divisions, as he usually does. This is because of severe penalties issued to Stewart, courtesy of the FIM.

We plan to appeal as I personally feel that the punishment far outweighs the situation; especially since I received both WADA and USADA approvals that prove I’m not cheating

He was punished due to an anti-doping violation (Adderall) and has not raced since June after being found in violation earlier this year. He will not be allowed back until August of 2015.

Mr James Stewart, Jr. underwent an anti-doping test conducted by the FIM at the round of the Monster Energy AMA Supercross, an FIM World Championship, held at the Century Link Field, Seattle, Washington. The urine sample obtained from Mr Stewart revealed the presence of a prohibited substance (amphetamine) listed in the category S6. Stimulant under a) Non-specified Stimulants and prohibited in competition under the FIM Anti-doping Code (CAD) in force."

Stewart is disqualified from all competitions in which he participated ... All results he obtained in those competitions are cancelled with all the resulting consequences including forfeiture of any medals, points and prizes.

"Taking into consideration all the evidence adduced, the CDI considered that, on the balance of probabilities, Mr Stewart had established how the prohibited substance had entered his body. Accordingly, the Judge was able to apply Article 10.5.2 of the CAD. Considering all the circumstances and having regard to Mr Stewart’s degree of fault and negligence, the CDI Single Judge came to the conclusion that the appropriate sanction to be imposed on Mr Stewart was a period of ineligibility of 16 (sixteen) months. The CDI further ruled that the period of ineligibility would commence on 12 April 2014 (date of the collection of the sample). Consequently, the period of ineligibility imposed on Mr. James Stewart will end on 11 August 2015 at midnight."

"In accordance with Article 10.8 of the CAD, the CDI ruled that Mr Stewart is disqualified from all competitions in which he participated (including the four rounds of the 2014 national Lucas Oil AMA Pro Motocross Series) subsequent to the collection of the sample (12 April 2014) and all results he obtained in those competitions are cancelled with all the resulting consequences including forfeiture of any medals, points and prizes. The FIM will therefore modify the rankings of the 2014 Monster Energy AMA Supercross, an FIM World Championship, accordingly."

Yoshimura Suzuki Racing is reporting that James Stewart has received notification from the FIM with a penalty regarding his anti-doping violation. The news came eight months to the day from the test at this years' Seattle Supercross event where he tested positive for amphetamines from his prescribed Adderall. The ruling lays out a punishment that severely affects the entire 2015 season for James and the Yoshimura Suzuki team. Suzuki Motor of America and Yoshimura Racing will continue their unwavering support for Stewart during this difficult period and like all the fans hope to see him line up at the gate as soon as his ineligibility is lifted.

Yoshimura Suzuki Racing’s James Stewart has announced plans to be at the season-opening round of the 2015 AMA Supercross Championships on Saturday, January 3 at Angel Stadium in Anaheim to support his team, teammate, sponsors and fans.

“I’m extremely disappointed to say the least,” said Stewart. “We plan to appeal as I personally feel that the punishment far outweighs the situation; especially since I received both WADA and USADA approvals that prove I’m not cheating. I’m bummed for everyone involved: my family, my team, my sponsors, the promoters and most of all the fans. Unfortunately, I’ve had to be very quiet in regards to this situation but I’ll be telling the full story in the next couple weeks so everyone can understand what we’ve been going through. Thank you all for your continued support.”