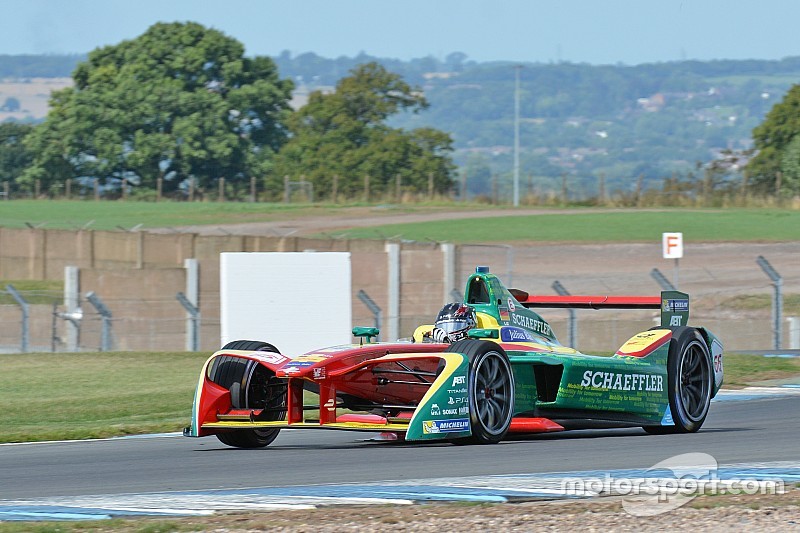 Daniel Abt and his Abt Schaeffler Audi Sport squad headed the final day of the opening public Formula E test at Donington Park, as rain curtailed the afternoon's running.

The day began with a slightly damp track, an off DS Virgin's Jose Maria Lopez causing an early red flag, but times quickly dropped throughout the morning as conditions improved.

Dragon's Jerome d'Ambrosio was the first to get within a second of Wednesday's lap record pace, setting a best time of 1m30.553s with just over half an hour remaining of the morning session, although the Mahindra of Nick Heidfeld went fastest some minutes later on a 1m30.095s.

Soon after, it was Abt's turn to take over the top slot on a 1m30.073s, which he maintained to the end of the session as Nicolas Prost beached his Renault e.dams machine the gravel at Coppice with five minutes left on the clock, bringing out the red flags.

Showers during the lunch break left the track damp for much of the afternoon session, but the closing half-hour saw improvements as conditions improved.

Wednesday pacesetter Jean-Eric Vergne (Techeetah) topped the session on a 1m30.234s, good for third overall behind Abt and Heidfeld.

Prost, Lucas di Grassi (Abt), Jerome d'Ambrosio (Dragon) and Antonio Felix da Costa (Andretti) filled out fourth to seventh on the strength of their times from the morning, while a last-minute effort from Venturi's Maro Engel put him second in the afternoon and eighth overall.

Adam Carroll was the best of the Jaguar drivers in 13th, 1.648s off the pace, while Harry Tincknell - who is up against Alex Lynn and Mitch Evans for the team's second seat - was 17th, 3.854s behind Abt and one place behind Dean Stoneman in the sole NextEV machine.

Robin Frijns only took part in the first hour of running as he had to travel to Hungary to take part in this weekend's Blancpain Sprint round, and was therefore an unrepresentative 18th in the second Andretti car.