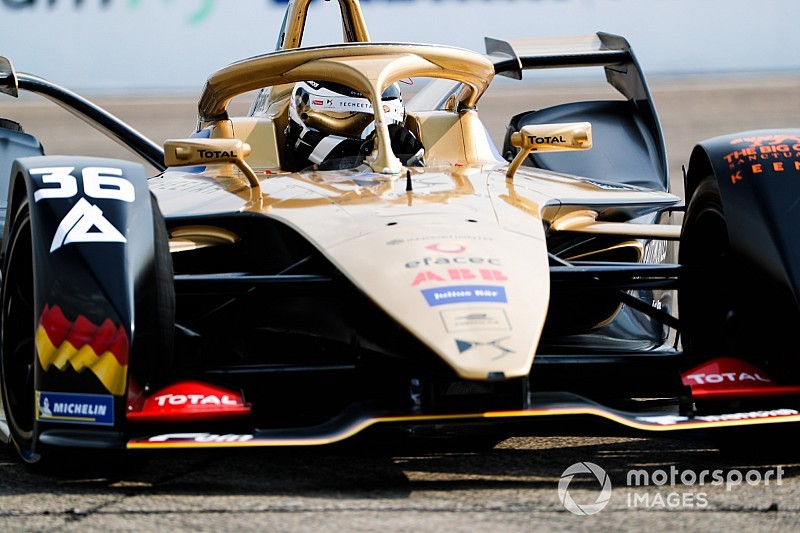 Uniquely for this race, both practice sessions took place on Friday afternoon in Berlin, a timetable change caused by FE wishing to avoid a clash with the build-up to the German football cup final on Saturday afternoon – an arrangement that has divided opinion among the drivers.

Both sessions took place in warm and sunny conditions at the Tempelhof track, with Jaguar driver Mitch Evans topping FP1 with a best time of 1m08.162s.

For much of FP2, only Mortara had bettered Evans’ FP1 effort – as the Venturi driver’s 1m07.685s put him to the front of the pack.

The drivers appeared to be struggling for grip on the abrasive concrete surface found at the Berlin circuit, with the long near-circular Turn 1, the tight left-hander at Turn 4 and the big braking stop for the Turn 9 hairpin appearing to be particularly challenging.

Lotterer was among the drivers to have a moment at Turn 4 when he locked up there during the early running.

But he shot to the top as FP2 headed towards its conclusion, improving compared to Mortara as his lap went on and setting the fastest third sector of the session, to take first place with 1m401s.

That left him 0.284s clear of Mortara, who therefore matched his FP1 result with second place.

Alexander Sims, who will carry a five-place grid penalty into qualifying for his clash with Lucas di Grassi in Monaco, finished third.

The BMW driver was 0.3s down on what was then Mortara’s benchmark time after sector one, but he pulled the gap down to just 0.030s behind by the finish line – ending up 0.314s adrift of Lotterer in the final order.

Sebastien Buemi leapt from P17 with his final full-power lap in the dying moments of FP2 to take fourth for Nissan e.dams, finishing ahead of Evans and Felipe Massa.

Antonio Felix da Costa finished seventh, ahead of Oliver Rowland and Alex Lynn, who locked up heavily at Turn 9 mid-way through the session.

Daniel Abt, who won this event last season, rounded out the top 10, with his Audi teammate Lucas di Grassi – second in the 2018 race – down in P13.

Championship leader Jean-Eric Vergne finished down in 17th, 1.056s slower than Lotterer, who trails his DS Techeetah teammate by one point in the current standings.

The Envision Virgin Racing drivers Robin Frijns, who finished 12th in FP2 and also has a five-place grid penalty, and Sam Bird – who wound up 21st – completed the lowest number of laps in the second session on eight apiece.

Bird missed much of the running in the middle of the session after clipping a wall with the right-rear of his car, which forced him to pit for repairs – although he was able to rejoin for the final minutes.