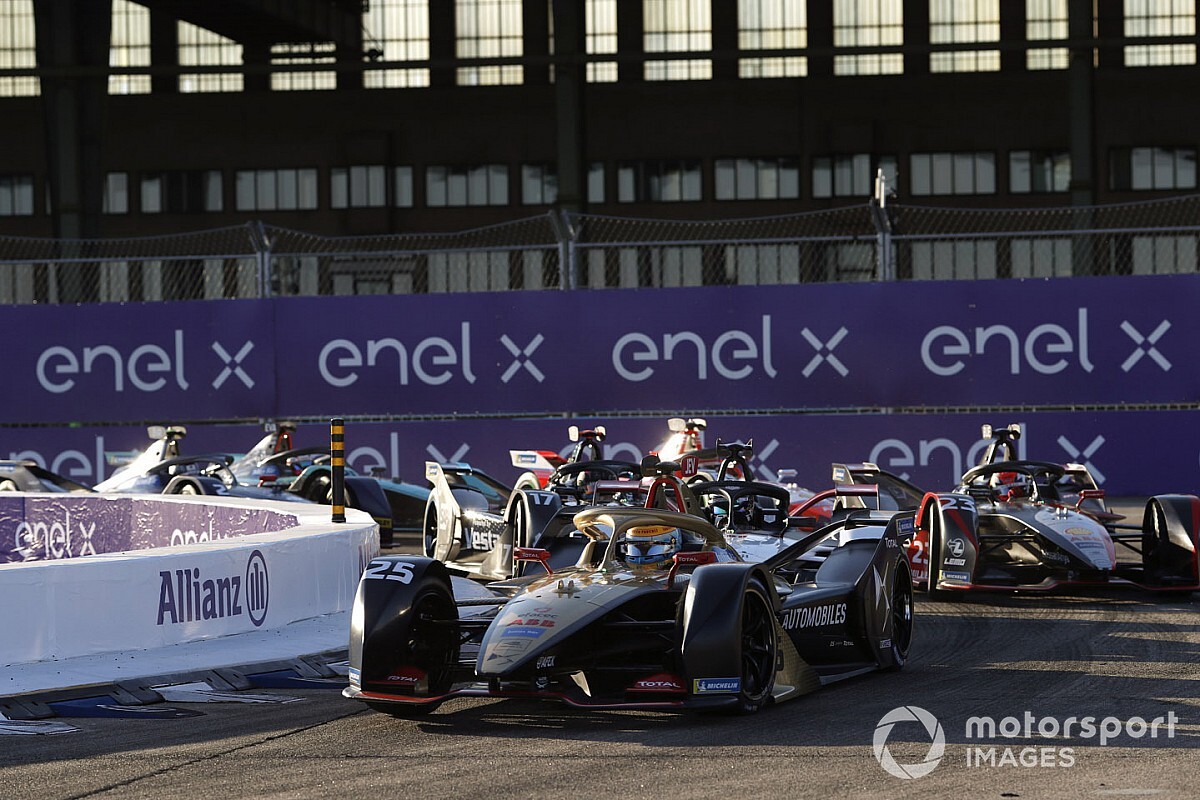 Jean-Eric Vergne won the fourth 2020 Berlin E-Prix at the Tempelhof Airport venue, after a perfect execution of team orders at DS Techeetah to fend off Nissan’s challenge.

With the second swap allowing polesitter and race leader Vergne to return to first place, he led a team 1-2 over da Costa by 0.497s to score his first victory of the season.

An equal launch for the top four on the grid spared a dramatic Turn 1, but the race was soon neutralised by a safety car after Saturday race winner Maximilian Gunther crashed. The BMW Andretti driver, starting 21st on the grid, lost out to NIO 333 driver Oliver Turvey via a brilliant inside pass on the approach to Turn 2.

But as Sam Bird ran sluggishly through the Turn 3 apex, it forced Dragon Racing pilot Sergio Sette Camara to brake heavily and in-turn Turvey was forced to slow. That left Gunther to lock up his front wheels and career into the back of Turvey, who was able to continue, but the German driver was eliminated on the spot.

Vergne maintained a 0.4s ahead of da Costa and then led cleanly away at the restart, but was not able to shake his stablemate or the chasing Nissan of Oliver Rowland. On lap nine, Rowland and Buemi triggered an early use of their 35kW attack mode boost to fall back to the leading pair as Rowland joined briefly behind Mahindra Racing driver Alex Lynn.

He resumed the position on the next lap down the inside into Turn 6, as both DS Techeetahs responded by taking their first of two attack mode power boosts. Although Vergne narrowly rejoined in first place, it hurt da Costa as he was knocked to fourth by Rowland and Lynn.

With one-minute more of the boost, da Costa regained his second spot after passing Rowland on the main straight into Turn 1 to quickly close back up to the rear of Vergne. On lap 13, a radio message for da Costa to “swap and attack” with Vergne allowed him to maintain a constant margin of 0.4s through the middle phase of the race.

With both cars running with 1% less useable energy than the Nissans, the pre-emptive move gave da Costa a buffer to Rowland and Buemi. Although the Nissans did close in a top-five chain trailed by Nyck de Vries, Rowland in third did not attempt an overtake.

That meant on lap 30, DS Techeetah ordered another uncontested change for position on the approach to Turn 1, from where Vergne led to the spoils to climb to second place in the points - having been only 12th after race two at the Tempelhof Airport circuit.

Nissan also asked its drivers to swap over, with Buemi holding an energy advantage over Rowland, but as Buemi passed into Turn 6 he missed the apex to delay the pair and ease the pressure on the top two.

Buemi would retain his third place to the flag, as a late and aggressive lunge from de Vries on the final lap promoted him to fourth ahead of Rowland.

Lucas di Grassi was a distant sixth for Audi ahead of Jaguar’s Mitch Evans and Andre Lotterer. Lynn and Felipe Massa completed the top 10 ahead of Sam Bird, whose team-mate Robin Frijns failed to start the race after Envision Virgin Racing could not fire up the car.

Stoffel Vandoorne, after qualifying 20th, would climb to 12th ahead of Alexander Sims.