BMW had topped all three days of pre-season testing at Valencia in October, but when asked if the team had expected to win immediately after that display, Marquardt told Motorsport.com: “No.

“To finish off a testing period with a positive result – with the reliability that we saw, also with being competitive – is good.

“It gives you a bit of relief, but at the same time [we knew] all the teams here have quite a bit more experience than us.

“[So] we were definitely taking the humble approach [in Ad Diriyah].

“Antonio did a fantastic lap in qualifying – circumstances were really tough [with] not a lot of track running – but it looks like our preparation back at home was pretty good.”

BMW had supported Andretti as a technical partner for the last two seasons before becoming a works squad for the start of the 2018/19 championship, although Andretti still owns the entry.

“That feels really great, I mean historic for us,” Marquardt said.

“First race of the BMW iFE.18 together with team Andretti. [It was] a long time in the preparation – guys back in Munich, powertrain and integration from our motorsport side, together with the Andretti guys in testing.

“To bring that onto the race track here in Riyadh for the first time and have the first victory from pole straightaway – you definitely can’t have it any better.

Da Costa’s victory was his first in FE since he triumphed in the Buenos Aires E-Prix in season one for the Aguri squad.

After calling the victory “great”, he explained that this occasion felt different after FE’s rise in the motorsport sphere.

“The thing is, when I won in season one, the wins here weren’t credited – let’s put it like that,” da Costa told Motorsport.com

“I had just lost my F1 seat and I was still a reserve driver for Red Bull.

“I could feel like nobody there really gave Formula E a lot of credit but it’s impressive to see how much [has] changed and to win now is definitely a different feeling.”

Da Costa, a factory BMW driver, also explained how the victory was a reward for joining Andretti at the start of season three and working with the squad over the last two seasons, where it finished seventh and 10th in the teams’ championship.

“When I joined Andretti this was the plan – [winning] was the plan,” he said. “Joining season five with BMW, this was always the plan.

“To see it happening, to execute it – there was a lot of pressure, especially after Valencia.

“Everyone in Munich was just telling me ‘alright mate, just win the race’ – so it is great to actually do it.” 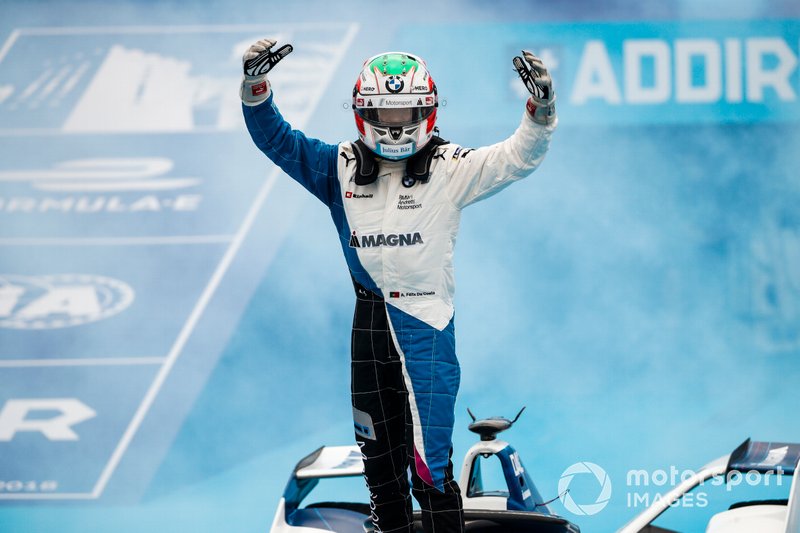