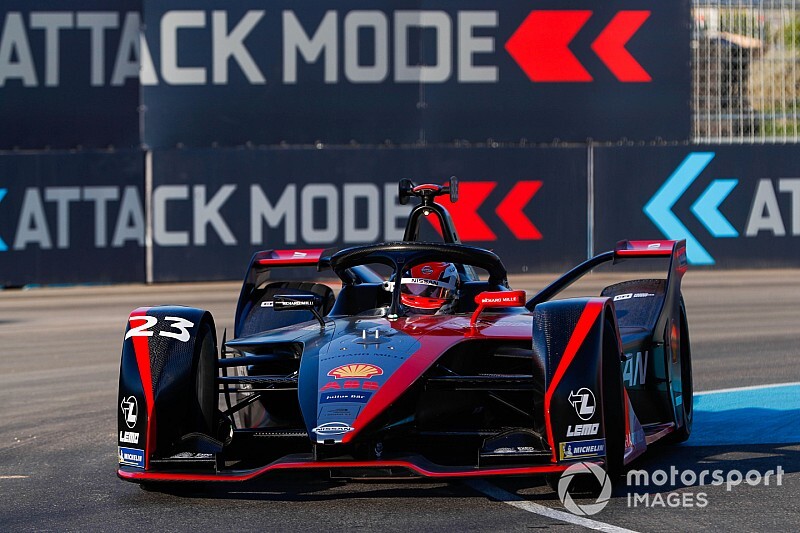 Buemi was running second in the second race in Saudi Arabia when a touch from DS Techeetah driver da Costa at the exit of the Turn 18 right-hander – the race’s first corner where the attack mode zone was located tight to its inside wall – spun him around.

The 2015-16 FE champion was able to get going but rejoined in an unsafe manner, forcing several cars to avoid him, and was later handed a penalty for his actions, while da Costa was penalised for the contact between the pair.

Buemi explained he was “going to go for the attack mode” when the incident occurred and compared it to his clash with Robin Frijns at a similarly placed zone at last season’s Paris race, which gave him a puncture while he led.

“Obviously, you need to slow down more to make it into the attack mode, you cannot just carry the same speed,” Buemi told Motorsport.com.

“I braked as late as I could to try to create a little bit of a gap, and as I slowed down to go to the attack mode, he basically kicked the back of the car.

“We discussed it in the briefing that the attack mode was not in the right place, because the attack mode shouldn't be in a place where you need to slow down more than the racing line.

“It's pretty obvious that the guy behind you doesn't know you're going to take it.

“But because we discussed it, I thought he would take a bit more margin, which obviously he didn't and he spun me around.

“[I] lost the [last] championship in Paris for the same reason. Today I got spun around for similar stuff.

“So I just don't understand why the FIA still puts the attack zone in only in such a place.

“I mean, if you start to have to make sure you have a two-second lead advantage in order to not get spun around to take the attack mode, where are we going? At some point, c'mon.

“We have nothing indicating we're going to take the attack mode. So, the guy behind has no idea.

“We need to slow down at least 15 to 20km/h more to make sure you get it because it’s so far away from the racing line.

“What should we do you know? JEV got spun around in Mexico, I got a puncture in Paris because of this, I get spun around here. How long do we need to go on?”

Da Costa said Buemi “didn't do anything wrong”, but added: “He's in control of that situation.

“He has a lot more tools to control the outcome of that situation than me,” da Costa added to Motorsport.com

When asked if he thought he should stop his manoeuvre to rejoin after the spin, Buemi said: “What do you expect that I just want to stay there until everyone passes?

“I thought there was a kind of gap and I went for it.”