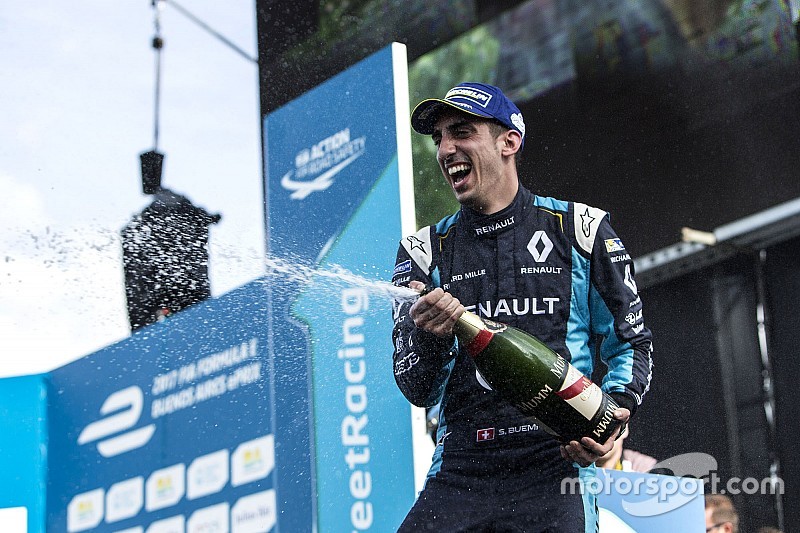 Sebastien Buemi took victory in the Buenos Aires ePrix to become the first driver to win three Formula E races in a row.

The Renault e.dams driver kept Jean-Eric Vergne at arm’s length in the second half of the contest to open up a 29-point lead at the top of the drivers’ championship.

His nearest challenger Lucas di Grassi led the race from pole early on, with Vergne and third-place starter Buemi in hot pursuit.

Di Grassi and his Abt Schaeffler FE02 was no match for Vergne’s Renault-powered Techeetah entry or Buemi’s factory machine, though, and he slipped from first to third in the space of three corners on the third lap.

Vergne lasted about as long in the lead, with Buemi executing a fine move under braking at the first corner and quickly establishing a strong advantage.

By the time Buemi came into the pits to swap cars on lap 18 of 37, his lead was around five seconds, a margin Vergne gradually ate into in the second half of the race.

Vergne cut the deficit to two seconds, but a strong final lap helped Buemi ease home, with Vergne a comfortable second and di Grassi – who fell to fifth in the opening stint – third.

Di Grassi had to repass Buemi’s Renault e.dams teammate Nicolas Prost to earn his podium, but the Brazilian’s result could be in doubt as he was under placed under investigation for an alleged unsafe release.

The Abt team released di Grassi into the path of Nelson Piquet Jr, who gesticulated as the two narrowly avoided a collision.

Di Grassi regained one of the positions he lost early on by emerging from the pits ahead of Piquet’s NextEV teammate Oliver Turvey, then dived past the jinking Prost into Turn 1.

Prost was a comfortable fourth ahead of Piquet, while Loic Duval produced a stirring performance – one that included a fierce wheel-to-wheel fight with Dragon teammate Jerome d’Ambrosio – to rise from 14th to sixth.

Daniel Abt, another to rise up the order after crashing in qualifying, split the two Dragon drivers on the final lap to steal seventh.

Turvey slumped to ninth having fought for a podium early on, while home favourite Jose Maria Lopez grabbed a point after being forced to start last after a qualifying crash.

Mitch Evans looked like he would claim Jaguar’s first points in Formula E after starting seventh and running solidly in the top 10 for the first two-thirds of the race.

But the New Zealander picked up a five-second time penalty for speeding under a full-course yellow, and he dropped to 11th on the road anyway after having to save energy in the closing stages.

Felix Rosenqvist was also robbed of the chance to score points when his second Mahindra refused to fire up in the pits; although the Swede eventually got going, he ended up three laps down in 18th.