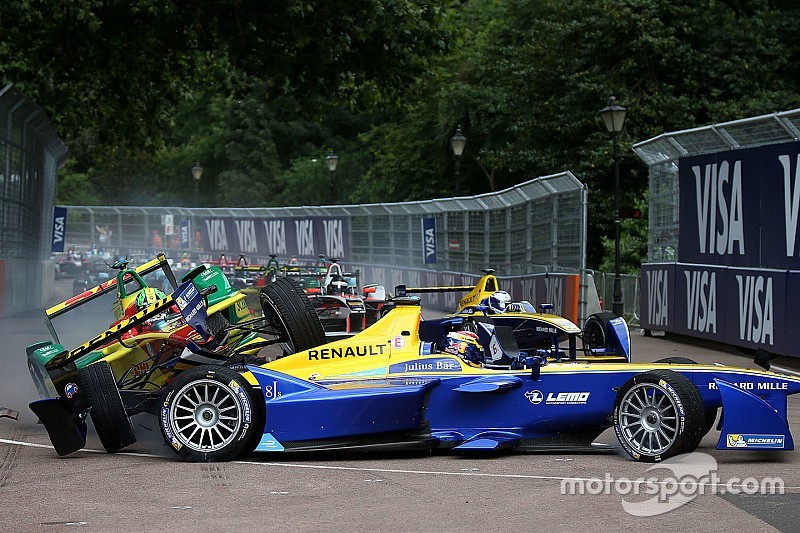 Sebastien Buemi has opened up to Motorsport.com about his intense rivalry with Formula E title adversary Lucas di Grassi ahead of the season three decider in Montreal next weekend.

Reigning Formula E champion Buemi saw a 32-point championship lead reduced in New York City last weekend as he was at the Nurburgring for his Toyota WEC duties instead - and he now heads into the final two races with just a 10-point advantage over di Grassi.

Speaking to Motorsport.com, Buemi described the legacy of his collision with his Brazilian arch-rival during last season’s Battersea Park finale as a defining point in their relationship, as they find themselves once again battling for the Formula E crown.

“I respect him [di Grassi] as a driver but I don’t respect what happened last year [at Battersea]," the Swiss driver said. "People within the sport know exactly what happened there.

"If [a collision] happens once more like this, what do you think people will think then? It will be very hard to explain for him. He can’t afford anything like that again for his reputation, can he?”

Buemi still identifies di Grassi’s failure to accept blame for the Battersea Park incident as a major reason for the breakdown in their relationship in the immediate aftermath of the clash.

He added: “The other side is that last year instead of him saying: ‘I tried everything and lost it and the situation happened as it did, sorry’, he then said that the fault is on me and I braked early.

"This I didn’t like and didn’t think was correct at all. You can push things so far, but there is a limit and he went well over it that day.”

“I prefer to lose with dignity than to try to win in a way where I could not look at myself in the mirror. Can he say the same? I don’t know, ask him. It is done now and it is over.

"We have had good battles since then and there is no real big problem from my side anymore.”

Motorsport.com understands that another incident occurred between Buemi and di Grassi after the Battersea Park finale last summer, creating fresh rancour between the pair.

Buemi would not elaborate upon the nature of this altercation and would only say: “After Battersea we had another bad story which nobody knows about and there will not be any publicity about this.

"So we had another problem too, but this is history now as well."

‘Di Grassi talks too much’

Buemi added he feels di Grassi’s pronouncements off the track betray a lack of confidence in his ability, but agrees that their rivalry is good for the nascent all-electric championship.

“He seems to lack some confidence if he needs to speak to everyone all the time that he outperforms the car he has,” opined Buemi. “I think the real good guys don’t need to say it, but he usually does and ends up just talking too much.

“If I wanted to, I could go around and tell everyone that I was the only guy who is winning regularly in a Renault car. [Jean-Eric] Vergne, [Esteban] Gutierrez and now [Stephane] Sarrazin have the same car and I am the only one to have won a race, in fact 12 races.

"I could do that, but I don’t because I feel like I don’t need to and people will see this for what it is. Maybe he does it because he thinks it is good for the championship, who knows?”

He added: “A rivalry is good and it spices it up for a new championship like Formula E. I just think you need to be correct and have a limit.

"To be honest I don’t read what he says anyway. I like to keep my energy for the track."

Di Grassi hits back: "Buemi has a problem with pressure"