Di Grassi hits back: "Buemi has a problem with pressure" 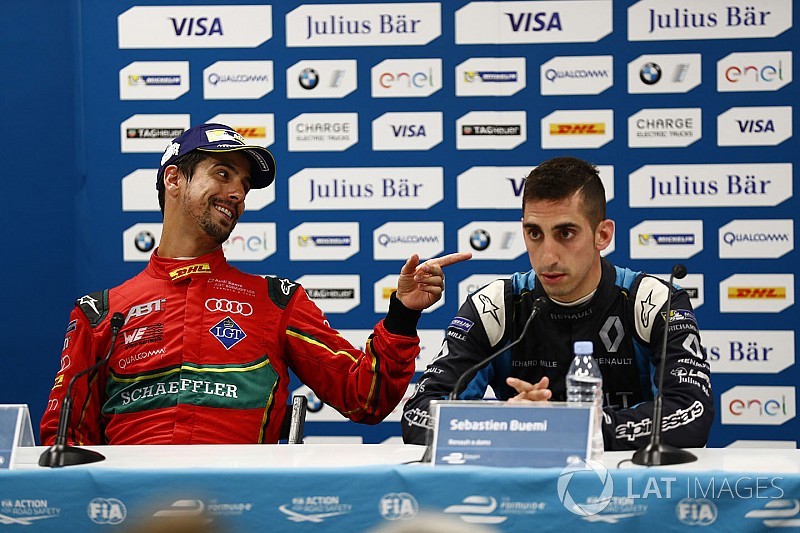 Lucas di Grassi has responded to criticism from Formula E title rival Sebastien Buemi over their clash at last season's Battersea Park finale by suggesting the reigning champion has a problem coping with pressure.

The Brazilian, who is 10 points behind his bitter rival heading in to the final two races of the season this weekend in Montreal, believes that Buemi is especially susceptible to the pressures of a title fight.

“He [Buemi] lost the championship in season one with quite a simple mistake when he spun on his out lap and lost it all," di Grassi told Motorsport.com. "So you can clearly see he has a few problems in this area.

“Everyone feels pressure in a different way of course. He has pressure big time this weekend, much more than me, this is because everyone will be waiting to see if those mistakes come again in Montreal.”

Di Grassi also referenced Buemi’s opinion that he ‘talks too much’, saying: “I don’t take any reference of his opinions or what his opinions are really. I just act in my natural and normal way.

"This is my approach and if he is happy or not happy with it, well this completely irrelevant to me."

He added: “He seems to have strong opinions still about Battersea and the way I behave and if it is not the way he thinks I should behave then again I say it is irrelevant to me. It is ancient history now.

"I say and think what is correct. Sometimes I am not politically correct as you can see from my twitter account sometimes, so I say what I think and that is just how it is.”

Di Grassi, who has won one race this season compared to Buemi’s six, still has a chance of snatching the title, largely thanks to Buemi missing the last two races due to the clashing FIA WEC round at the Nurburgring.

“It is fair to say that Buemi and Renault should have wrapped the title up by now, but as we saw they had problems in Mexico and obviously there was a circumstance quite out of their control at New York,” he opined.

“There are many ‘ifs’ and I could say the same, but what is important now if the state of the championship as it stands. We go to Montreal with a good chance after maximising everything this season.”

The Abt Schaeffler Audi Sport driver re-iterated his belief that it's Buemi's championship to lose, saying: "The pressure is on him. If he doesn't have a good weekend I will win the championship.

"The title is more difficult for me obviously, so I'm going to try to win, I'll do my best and if I win both races I'll be the champion.

“I'm going to take more risk than I would if I were 10 points ahead. I have little to lose and a lot to win.

"Buemi can only really lose it and as we have seen in the past both he and the team can make mistakes.”