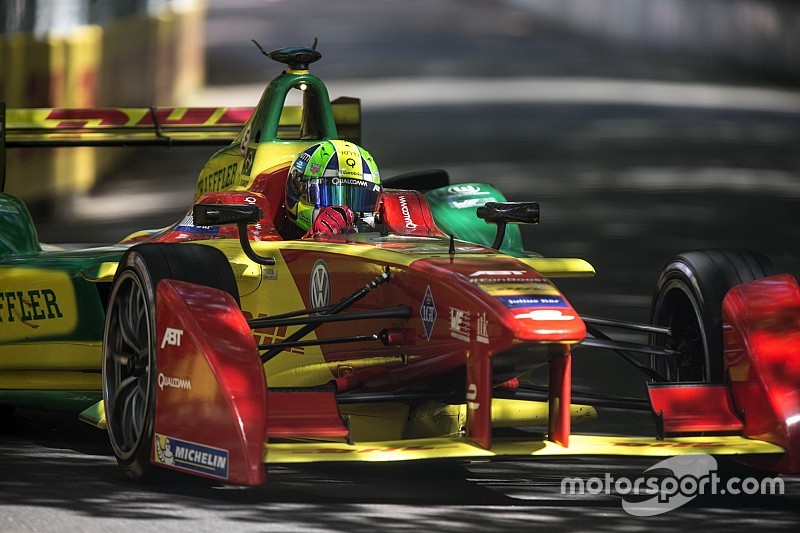 Lucas di Grassi has denied blocking Sebastien Buemi during their title fight in the second race of the London ePrix, suggesting that such a tactic would have been impossible.

After di Grassi piled into the back of Buemi at Turn 3 on the opening lap, the pair’s title fight was reduced to a question of who could set the fastest lap and take the two resulting bonus points.

In the end, Buemi did so – but not before accusing di Grassi, who earlier had bagged the fastest lap, of deliberately slowing down to hold him up and therefore deny him the chance to set a better time.

Responding to the charge, di Grassi said any such tactics were purely in his rival’s imagination.

“We were waiting for good gaps, and for the track to get rubbered in,” said di Grassi. “[Blocking Buemi] is impossible.

“The track is so big, how can I block? On top of that, that was not the case. Whatever his imagination is, that’s another scenario.

“He should be proud he won the title, and after he cools his head he will have a different approach."

Di Grassi re-iterated that the first-lap contact was the result of Buemi braking too early: “I saw the data in the stewards’ room, and it was very clear.

“I had a very good start, and I knew I had to be aggressive and overtake Prost at the beginning if I had any chance to fight Seb.

“Here it is easy to block, and I knew if I was behind Prost it was going to be a struggle because he was fast, and I would have had no chance to fight Buemi.

“Seb braked almost 50 metres too early compared to me and Nico – when I realised I locked my wheels, and we had the incident. In my position, he would have been just as aggressive as me.”

Asked if he could have avoided the clash by moving to the outside, di Grassi replied: “You have to make the decision in a split-second, and when I realised Seb slowed early, and I was already braking.

“I tried to apply more pressure and I locked my wheels, I couldn’t control the car anymore."

Di Grassi was handed a post-race penalty of 50 seconds for causing the first lap collision, but this did not affect the results as the Brazilian was unclassified anyway.