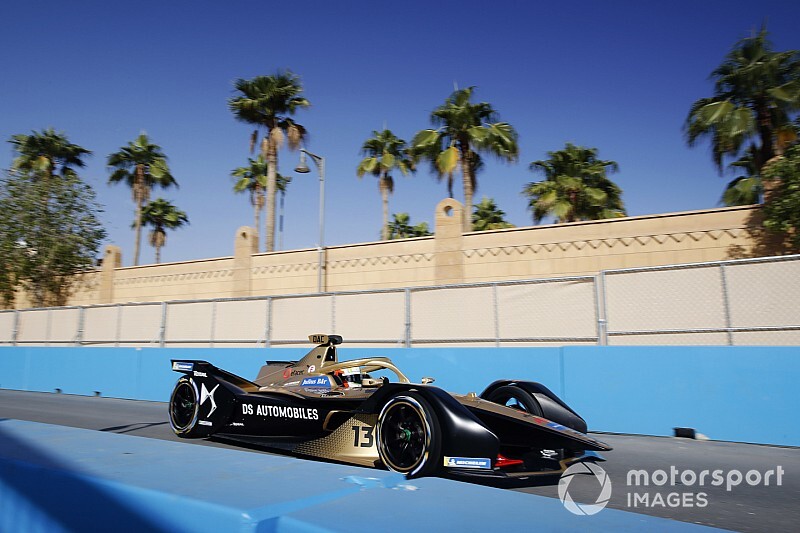 Circuit conditions were vastly improved over Friday’s after the circuit had rubbered in over the course of the weekend, giving the drivers almost 3.5s advantage over the first race’s qualifying laps.

Da Costa posted a 1m11.084s lap to pick off Oliver Rowland’s then-pacesetting time, as the Nissan e.dams driver was the first to submit a laptime on the full allowance of 250kW.

After Rowland tapped into the maximum power levels with 10 minutes to go, the practice order began to shuffle around as the field prepared for qualifying runs.

Sims had enjoyed multiple appearances at the top of the timing boards during the 200kW runs in the early stages, trading times with Da Costa, Edoardo Mortara and Rowland throughout the middle portion of the session.

Wehrlein had set the then-fastest middle sector on that lap, before encountering Venturi’s Mortara in the final sector - which hindered any further progress up the timing board.

Robin Frijns popped up into sixth despite encountering the glacial Ma Qing Hua towards the end of his final lap, the Envision Virgin driver heading the works Audi duo of Daniel Abt and Lucas di Grassi,

Jerome d’Ambrosio was the last driver in the 1m11s bracket in 11th, beating Sebastien Buemi by 0.2s.

Mortara and teammate Felipe Massa were locked in 13th and 14th; having spent the majority of the session around the upper echelons of the field, the two could not capitalise on full-power running.

Having impressed with podium finishes on Friday, Andre Lotterer and Stoffel Vandoorne could only occupy 15th and 16th overall.

Reigning champion Jean-Eric Vergne endured another miserable session, propping up the timesheets after hitting the wall at turn 16 in the opening 10 minutes to break his left-rear suspension.

DS Techeetah was able to quickly repair the damage to Vergne's car, but he was unable to rejoin the session despite getting back into the cockpit as he had to have a precautionary battery change due to the high level of g-force recorded in his wall strike.

He is expected to take part in qualifying at the Diriyah track later on Saturday.