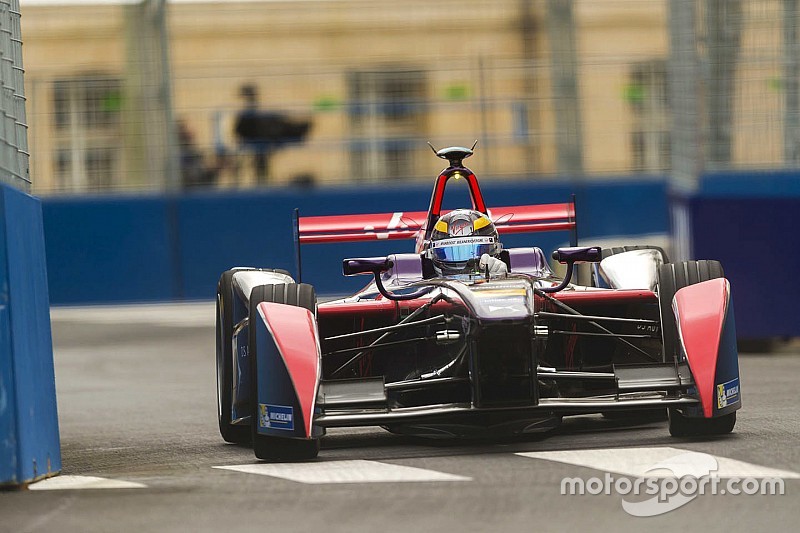 Jean-Eric Vergne: "Standing on that podium was a very important moment for me."

Today saw both DS Virgin Racing drivers impress throughout both practice sessions, and then follow it up with fantastic performances during Qualifying, with Sam Bird starting the race in Pole Position and Jean-Eric Vergne starting in P3. Vergne missed second position on the starting grid by the very narrowest of margins, and whilst the team would have loved to have locked out the front row of the grid, it was left with an almost perfect starting position for the home race of DS.

As the cars waited on the grid for all five lights to go out it, expectations were high in the DS Virgin Racing garage, but unfortunately Bird suffered significant wheel spin at the getaway, losing the lead to Di Grassi before the first corner.

What a fantastic, unforgettable moment for everyone behind the DS Virgin Racing team.

Vergne also seized the opportunity to pass his teammate with a bold move which left him tailing Di Grassi as the cars completed the first lap.

Di Grassi slowly extended his lead during the first stint as Bird and Vergne found themselves in an intra-team battle for second place. Both DS Virgin Racing drivers continued to lap in very close formation for the remainder of the first stint and pitted at exactly the same time. Bird attempted to jump Vergne as both cars exited the garage after their stops, leading to a sharp inhale of breath amongst the engineers and mechanics as they came close to touching. Fortunately, they didn’t and so picked up where they’d left off prior to coming in.

During the second stint Sebastien Buemi slowly started to make his way up the field from P8 to P4, eventually hooking on to the back of Bird and aggressively challenging him for position over a number of laps. Buemi tried to use his Fanboost to steal the position but Bird defended well, while Vergne continued in second.

Bird held out until six laps to go, finally succumbing as he approached the first corner where, whilst defending his position, he ventured off line for the turn, braking too late and going straight on. Whilst he pulled off a spectacular donut to rejoin the track without damaging the car, it was little consolation, as the error was enough for Buemi, Nicolas Prost and Stephane Sarrazin to pass, leaving him in P6.

Vergne continued to hold onto second position until the end of the race, which finished under a safety car after a crash involving a backmarker. The team had been hoping that the race would restart, as Vergne had a Fanboost, primed and ready to use to challenge for the win after everyone had bunched up under the safety car, but unfortunately the backmarker’s car couldn’t be cleared in time and second was where he finished. “This is just a fantastic result for the team and for DS at their home race. I’ve had a complicated season and the team have been patient with me and I wanted to give something back today and that’s exactly what I’ve done. Looking ahead I want to push for more podiums and more wins, the team deserved this and the atmosphere here in Paris has made the day even better. Standing on that podium was a very important moment for me.”

Despite missing out on what should have been a podium finish, Bird remained pleased for his teammate, understanding the importance of doing well at a home race with the London ePrix on the horizon. “I’m pleased for Jev, he really deserved this. I was challenging him for that second place because this is motor racing and that’s what we do but overall I’m please for the team. Once again we’ve proved we’re contenders and with both our performances today I feel confident ahead of Berlin.”

Team Principal Alex Tai reinforced the importance of the team’s partnership with the Parisian brand DS Automobiles by adding “DS have brought a level of engineering excellence to our team and we are pleased to have had both drivers compete for podium positions for the majority of the race. Whilst I’m a little disappointed with the end result given where we qualified, I’m pleased for Jev and for DS that we have come away from Paris with this sort of result. It gives us all a lot of confidence going into the German round of the Championship.”

Yves Bonnefont, DS brand CEO was also thrilled with the DS Virgin Racing team’s performance. “We couldn’t have asked for much more. What a fantastic, unforgettable moment for everyone behind the DS Virgin Racing team. I’m extremely proud of this result, a greatly satisfying moment for everyone involved. Well done to both our drivers, two talented men who showcased the team’s talent in the city where our brand was born.”

The next stop on the Formula E calendar will be the German capital, Berlin, on May 21st.

NEXTEV TCR to split with Campos for season three