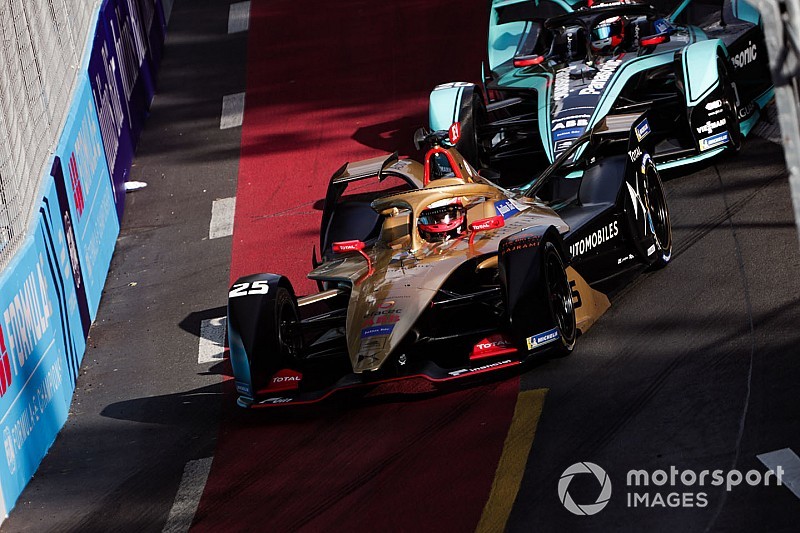 Evans had qualified on the front row alongside polesitter Vergne but, following the lengthy red flag period, the Jaguar driver had a clear edge on pace.

The narrow Bern circuit meant overtaking was at a premium and Vergne's defending at the downhill run to Turn 3, the long Turn 6 bend and on entry to the Turn 7 left-hander stifled Evans's attempts to pass.

The location of attack mode, on the long straight between Turns 8 and 9, meant drivers incurred no time loss to activate the power boost.

Evans was unable to use its effect to pass Vergne before the DS Techeetah driver responded with his own activation a lap later, with the same battle taking place during the second use of attack mode.

Evans told Motorsport.com: "I was just trying anything to try and force him [Vergne] into something.

"Turns 3 and 6, the reason [Vergne was put under pressure] was to try and compromise his exit for the run down to Turn 7 and try to make an overlap, but that didn't materialise.

"He was covering well and, especially after the safety car and the full-course yellow, there wasn't really enough energy saving.

"We were definitely the faster car, we were very fast. I was cruising behind him, under-consuming on energy which was a great position to be in. But attack mode, with no real time loss, it probably saved him.

"If there was another situation like Rome [where Evans won] or maybe a one- or two-second time loss [when activating attack mode], it would have been another story."

Evans added that Bern's attack mode causing no real time loss meant there was no strategy alternative to employ that could have helped him overhaul Vergne.

The Jaguar driver activated his first use earlier than leader Vergne and Nissan e.dams' Sebastien Buemi directly behind him, but none of the three changed positions.

"It's all you can really do. If you have a time loss, you can play with it more and have a big crossover," Evans said.

"If I activated it and I was right on his gearbox and he's got to activate it [at the cost of] a second, he's snookered.

"The whole attack mode period to attack him, if he's snookered and he can't go for it, there's more strategy [options]. Today you just defend for one lap, survive, cover me off. It's a shame, but that's the way it was.

"I could maybe have been a bit more aggressive, but I was happy with how I approached it. It was clean racing, it was good racing."

Evans added that his second place finish in Bern proved Jaguar's victory in Rome - its first in the series and the manufacturer's first major win in 28 years - was not a "one-off".