Mitch Evans recalled two "hairy" moments that bookended his Marrakesh Formula E race, having a run-in with Pascal Wehrlein at the start and then his late pass on Jean-Eric Vergne.

Starting from sixth, Evans was pitched into an early tussle with Pascal Wehrlein, after the Porsche driver had been passed early on by Jake Dennis for fourth place.

But having nursed an issue in the early phases which caused him to haemorrhage positions in the first half of the race, Wehrlein put up a resolute defence against Evans to protect fifth.

Evans, however, felt that Wehrlein's defence was over the line - and directed several hand gestures of frustration at him having been visibly dismayed in the heat of combat.

"I was hoping for a podium, but obviously with everything we had to face, you never know what's going to happen," Evans recalled. "I lost a lot of ground on the first few laps; Pascal was defending from me - he had an issue and he was defending me like crazy.

"Just suffered a bit, lost a bit of time and then had to use a bit of the tyre up to catch up; it wasn't ideal but got myself back into the hunt and kind of came away with a good result.

"I was sort of settled for fourth and obviously I think Jean-Eric ran into an issue so I capitalised on that. But it was well managed by the team, it was not easy - we were managing all the things with strategy and got it done, so big team effort." 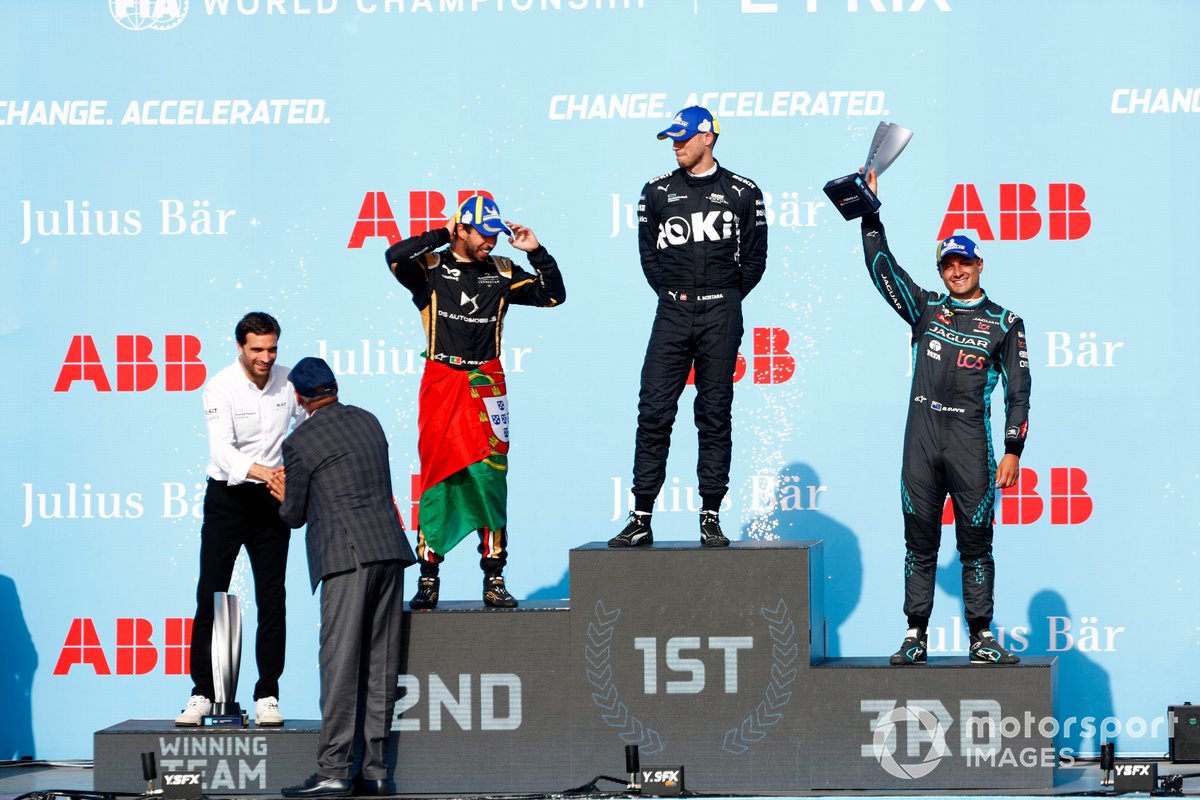 Wehrlein put his early issue down to being stuck in a low-power mode, but was yet to pore over the data to find the root cause.

He said: "There was an issue at the start, I was on low power somehow. We need to check and see if there was an issue but yeah, didn't manage yet to have a proper meeting and to analyse the race.

"Obviously, it's quite frustrating starting from P4, we were hoping for good points but couldn't manage it."

Although Evans had spent the middle portion of the race in second place, the Jaguar driver was passed by both DS Techeetah cars and looked set to miss out on a podium.

But as Vergne began to flag towards the end of the race, Evans plotted a move on the Frenchman - but was caught by surprise and had to make a "spontaneous" pass as Vergne lifted heavily for Turn 3 on the last lap.

"I knew he was suffering with something - I don't know exactly what, probably battery temp, so he was coasting very early to manage it," Evans recalled. "I knew I was probably going to get him, it was just a matter of where, and he just lifted very early.

"He thought I was going to go to the right, he covered a while and then I went to the left and it was a bit late for him. It was a bit spontaneous, a bit hairy but got it done so it's good - I'm still here, alive and breathing, so it's all good."

The circuit that "punishes" newcomers to Japan's racing scene

Jaguar reserve Norman Nato will deputise for Sam Bird at the Seoul Formula E double-header, as the Briton is unable to complete in the season finale with a broken hand.

Stoffel Vandoorne can't "turn up and take it easy" at Formula E's Seoul finale, despite his 36-point cushion over second-placed Mitch Evans in the drivers' standings.