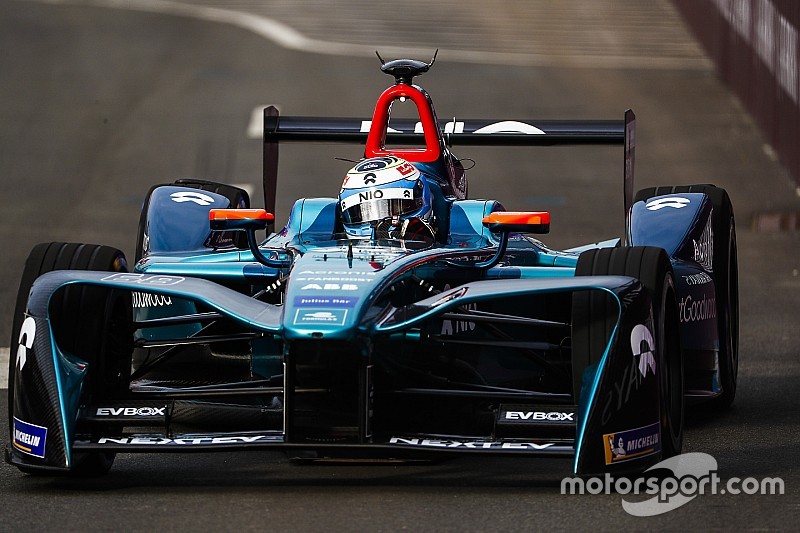 Luca Filippi says his contractual situation with the NIO Formula E squad means he expects to continue racing with the Chinese team for the 2018/19 season.

Filippi finished 21st in the season four standings with 1 point, 45 fewer than teammate Oliver Turvey, who was 10th in the drivers’ championship.

The Italian driver was also replaced by Ma Qing Hua in Paris as NIO exercised its right to make a driver change ahead of the final three events of the 2017/18 season, before returning to the squad for the remaining four races.

“I don’t know exactly how much I can say about it, [but] I can tell you I have a signed contract already, which has been signed [since] last September and is still going for longer,” Filippi told Motorsport.com

“So from my point of view I expect to keep doing Formula E.

“The team has given me a lot of faith. For sure I wanted to do more, and I feel I can do better than this. I don’t feel that I’ve done what my potential is in reality.”

Filippi, who is understood to have recently tested NIO’s Gen2 car in Spain, described his debut FE season as a “rollercoaster”.

“Horrible is unfortunately the word,” he said. “It’s been a bit of a rollercoaster. It started well, competitive, [and] then I had some unlucky moments.

“I was competitive in Hong Kong and in Marrakesh and Santiago but it’s been a bit of an unlucky situation.

“After that I was struggling a little bit in qualifying sometimes and it became sort of a mental thing.

“Rome could have been a turning point because I was very competitive there, very motivated, but unfortunately everything went wrong.

“In qualifying I just couldn’t get to do it and in the race I was just involved in an accident I couldn’t avoid.

“That would have been a very important turning point for me because of the home race and everything.

“Then after that it was [about] chasing the result that wasn’t coming and when it’s like that it’s hard.

“For sure I feel I under achieved compared to what my expectations were. It’s a bit of a shame.

“[New York] wasn’t bad. [I was] unfortunate with the safety car [in race one] because we had a different energy strategy.

“[In race two] with Antonio [Felix da Costa], he admitted he made a mistake and I unfortunately paid a very high price for that.

NIO was unable to comment on its season five driver contract situation when approached by Motorsport.com.