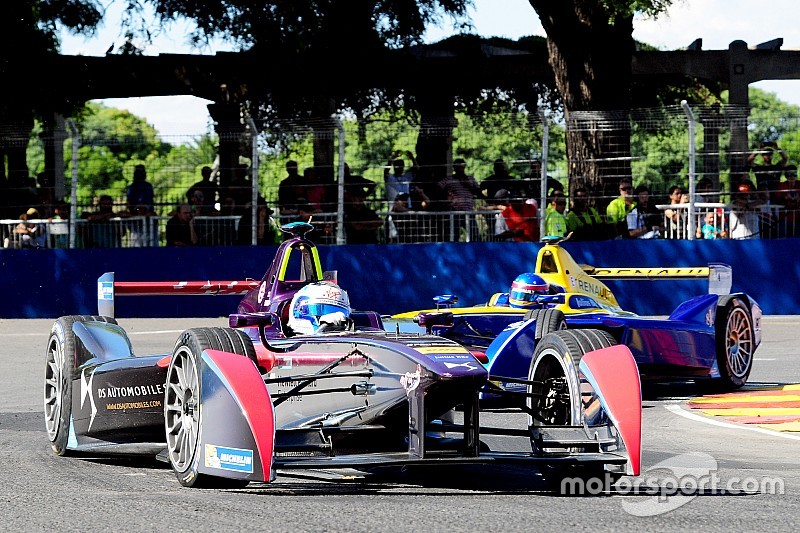 The FIA Formula E Championship has opened up a tendering process for new chassis and batteries in readiness for season five of the series, which will begin in the autumn of 2018.

Applicants will be made known and presented for selection at the next FIA World Motorsport Council Meeting in June.

Motorsport.com believes that both Renault and DS Citroen could consider tendering for the battery deal to supply the grid from season five onward.

The objective for the new battery tender is for drivers to complete the current race distance without changing cars.

“We will have a look at the tender because of course it might be very interesting for a manufacturer like DS to work on this and to be the supplier for all the teams,” DS Citroen’s Xavier Mestelan told Motorsport.com.

“But we haven’t taken a decision currently on this point. I think the main focus on the future [for the championship] will be on the battery side. It is very interesting for OEM’s to improve the technology for the road car and the race car.”

Williams Advanced Engineering, who currently supply the entire grid with the battery, are developing their award winning product for seasons three and four, and are believed to be working on a tender to continue in to season five and beyond.

“Along with maintaining the batteries during the season we are continually developing and evaluating options to improve and enhance the batteries going forwards,” Paul McNamara, Technical Director of Williams Advanced Engineering, told Motorsport.com.

“We will be working these into the batteries for season three and four. The key areas that have been in focus for us have been the cooling system, the robustness of the cell mountings in the modules to maintain a very low resistance with the high vibration loads that the batteries see and the control system as we learn how the system behaves.

"The cells themselves will also require development to enable to deliver 250kw and the integration of the cells within the overall mechanical, thermal and electrical package will be key.”

From a chassis perspective, the original Formula E car, designated the Spark-Renault SRT_01E, was designed and built by Spark Racing Technologies alongside Dallara back in 2013/14.

The car was designed with a basic architecture in mind, and has so far served its purpose as a package for teams to develop their own powertrains in season two after an initial first ‘spec season’ in 2014/15.

Initial outlooks on introducing fast-track re-generation aspects such as a four-wheel drive accommodated chassis and the introduction of torque vectoring – a method of differing the amount of power going to each wheel - is likely to be held back until after season five in 2018/19.

That is the season when the championship could target moving to one car per driver, instead of utilising the current two.

“We could work on a lot of [technical] points like they did on the WEC but don’t forget that this series is a start-up,” Mestelan told Motorsport.com.

“Before we increase all the aspects of the technology like a 4WD car, bigger battery, more re-gen technology, we must not forget we must be sure that the series will increase in media coverage.

"Nobody will spend a fortune in this series if we do not have ‘cash back’ in media coverage. So we must build the series step by step.”