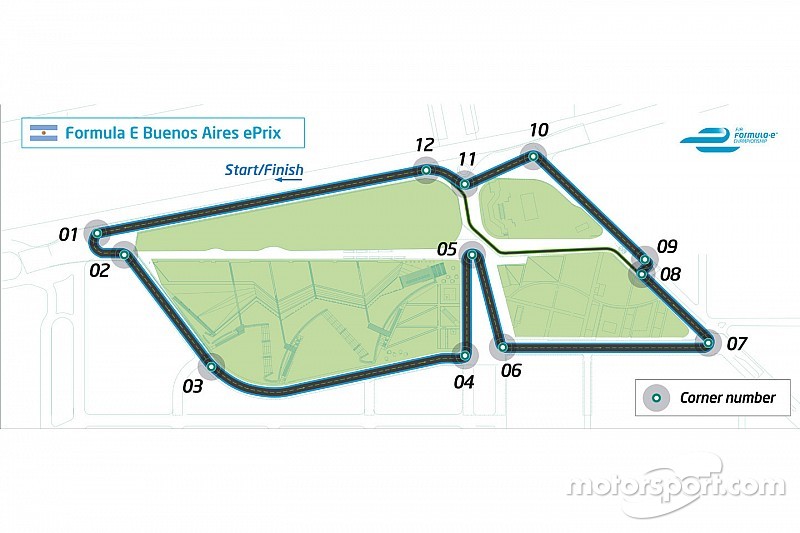 BUENOS AIRES, ARGENTINA (July 21 2014) – The circuit layout and location for the 2015 Buenos Aires ePrix, host for round four of the new all-electric FIA Formula E Championship, has been revealed today.

Taking place on January 10 2015, the 2.44km anti-clockwise track lies in the popular and modern Puerto Madero district to the east of the Argentine capital of Buenos Aires. It has been designed by Santiago Garcia Remohi and features 12 turns including a mix of high-speed corners, chicanes and hairpins. The ePrix has been warmly welcomed by Mayor Mauricio Macri, along with the City Government, local authorities and the ASN. The race is one of two in South America along with Punta del Este in Uruguay (Round three) on December 13 2014.

Commenting on the layout, Mahindra Racing’s Bruno Senna said: “Looking at the track, you have to say it’s got a good combination of corners. There’s a chicane, some high-speed turns with a change of direction and slow-speed as well. It’s impossible to tell from the map about undulation, but I think that it could make for an interesting race and it will be fun to drive.

“I think the main overtaking point will be into Turn 1 under braking, or maybe into T4 or even T5. T7 is a possible passing point too, so it does lend itself to some potential overtakes, but we’ll have to see when we get there.”

Alejandro Agag, CEO of Formula E said: “We’re very excited about racing in Argentina and want to thank the City Government, Mayor Mauricio Macri, the ASN and all the local authorities for their continued support, investment and backing. We believe this race is going to provide a fantastic spectacle for the people of Buenos Aires and for Formula E fans around the world.”

Mayor Mauricio Macri said: “For Buenos Aires to be selected to host a Formula E race alongside worldwide cities such as Beijing, London and Miami demonstrates the commitment of the city to embracing new technologies, clean mobility and respect for the environment. The electric vehicle will play a significant role in reducing future pollution in cities across the globe, making them better places to live, and Buenos Aires is pleased to be at the forefront of this and to be supporting a pioneering initiative such as Formula E.”

The Buenos Aires ePrix becomes the fifth track to be revealed by Formula E organisers, with the roads surrounding Beijing’s Olympic ‘Bird’s Nest’ Stadium forming the season opener, followed by a race though the centre of Putrajaya in Malaysia for round two. Punta del Este’s picturesque coastline provides the venue for round three with round seven taking place in Long Beach, Southern California, using a modified version of the city’s historic street circuit. The remaining tracks will be released approximately six months prior to the race.

Formula E is the FIA’s new fully-electric single-seater championship designed to appeal to a new generation of motorsport fans, whilst accelerating the interest in electric vehicles and promoting sustainability. Competing entirely on city-centre circuits – with races also in China, Malaysia, Uruguay, USA, Monaco, Germany and the UK – it uses cars capable of speeds in excess of 150mph (225kph). Its 10 teams and 20 drivers feature some of the leading international names in motorsport including Alain Prost and Michael Andretti, along with high-profile environmental supporters including Sir Richard Branson.