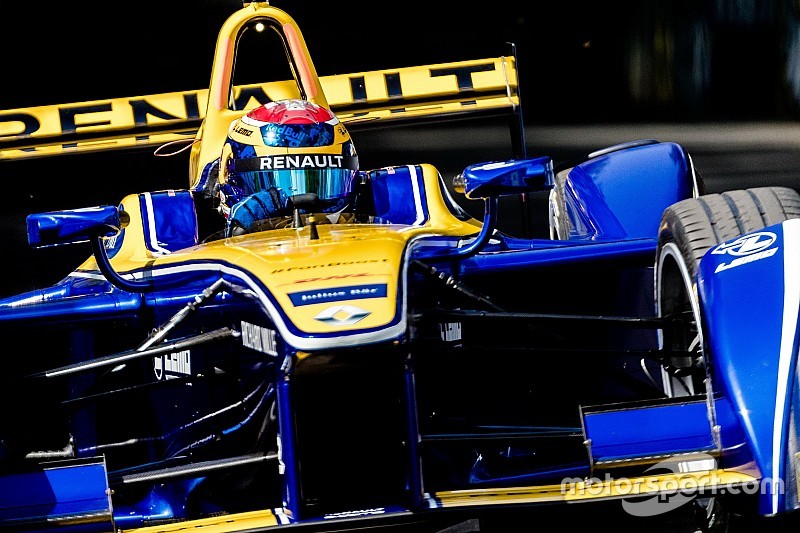 Sebastien Buemi has been crowned Formula E champion after surviving a first-lap collision with title rival Lucas di Grassi, the Swiss driver taking the spoils by virtue of setting the fastest lap in a bizarre second London ePrix race.

From pole position, Buemi made a good start to lead away Renault e.dams teammate Nicolas Prost, with di Grassi following the pair closely through Turns 1 and 2.

It was at Turn 3 where the drama unfolded, as di Grassi jinked to the outside of Prost approaching the tight left-hander.

But the Brazilian appeared to misjudge his braking, as he piled into the rear of Buemi's car - putting both in the barriers as Prost moved into the lead.

It was a lead that the Frenchman would never relinquish, as he completed a straightforward double victory at Battersea Park ahead of Daniel Abt and Jerome d'Ambrosio.

But as Buemi and di Grassi both limped back to the pits, all eyes were on the battle to set fastest lap and clinch the two points that go with it, the pair having been level on points heading into the race.

Di Grassi set the benchmark at first, but it was clear his lap wouldn't be enough - and sure enough, after a couple of frustrated attempts, Buemi set a best lap of 1m26.056s despite encountering Ma Qing Hua in the last sector.

Subsequently, Buemi improved to a 1m24.582s, which di Grassi was poised to beat on his last attempt in the dying stages, only to lose time in the final sector and fall short with a 1m24.633s.

Buemi finally put the fastest lap out of reach with a 1m24.150s, by which time di Grassi had got out of his car, resigned to defeat.

"I was not expecting to celebrate it that way," said Buemi. "But I'm more than happy. It was a tough season, and after what [di Grassi] did [at Turn 3] I didn't know what to think.

"Even after when we were trying to set the fastest lap, he was waiting for me. But in the end the best team and the best driver won."

The battle to set the best lap overshadowed the race for the win in the final round of season two, for which Prost encountered little resistance after the first-lap chaos.

Nick Heidfeld inherited second at that stage, ahead of Abt, but it was clear that the Mahindra driver was holding up his fellow countryman in the battle for the runner-up spot.

Abt finally got the move done on lap 17, after the third safety car and just prior to the mandatory car swaps, but had already lost seven seconds to Prost.

The gap would more or less remain at that size for the remainder of the race, as Prost cruised to a straightforward second victory of the season and the third of his career.

During the car swaps, Jean-Eric Vergne moved up to third, having jumped Heidfeld, who then had Antonio Felix da Costa in his mirrors for the rest of the race.

But all three were awarded 50-second penalties for exceeding the maximum usable energy, dropping them to seventh, eighth and ninth.

That promoted d'Ambrosio to third place, just ahead of Dragon teammate Loic Duval, who made his way from the back of the grid to take fourth ahead of Stephane Sarrazin and Bruno Senna.

Duval, however, courted controversy when he squeezed Robin Frijns into the wall during a battle for position, bringing out the third safety car.

The second was the result of Sam Bird's car grinding to a halt early in the race, not long after the field had resumed racing following the first-lap incident between Buemi and di Grassi.