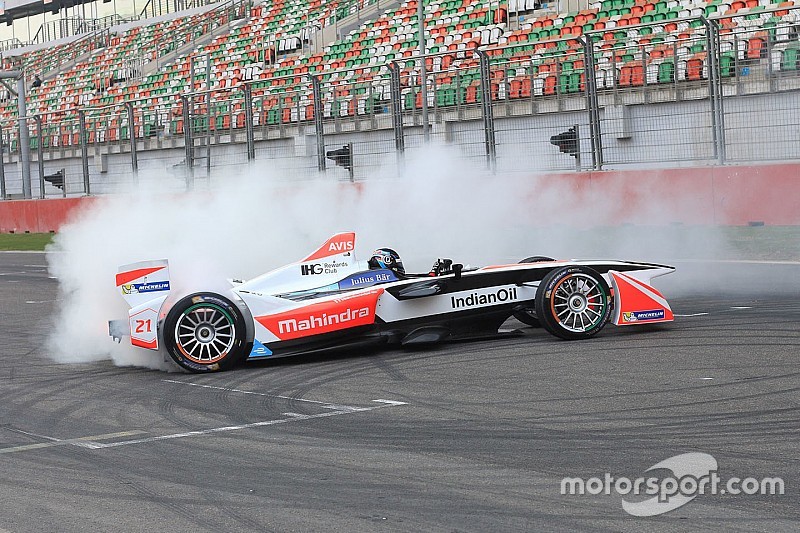 Mahindra Racing demonstrated its racing machines at the Buddh International Circuit, with Nick Heidfeld and Danny Webb behind the wheels of M2Electro and MGP30 respectively.

The promotional event, which doubled up as a filming day for Mahindra, was primarily held to showcase Mahindra’s capabilities to the media and generate awareness about the technologies used in their machines.

“After Auto Expo, it was a good time to showcase the vehicles here.

“And right now, with the diesel issues happening in Delhi, it’s a good medium to talk about mobility solutions,” he added.

Both Heidfeld and Bruno Senna were scheduled to run at BIC, but the latter had to spend the event on the sidelines due to problems with his seat.

The Mahindra drivers had come for the event on the back of a fine double point finish at Buenos ePrix.

They spent the last two days doing promotional work for Mahindra, which included a visit to the Delhi Auto Expo.

Along with the Formula E regulars, 2013 Asia-Pacific Rally champion Gaurav Gill, having strong ties with Mahindra, also got a taste of the M2Electro to end the day's proceedings at BIC.

The event also marked the first public outing of the new MGP30 Moto3 bike with Mahindra's test rider Webb. The bike was launched last week at the Auto Expo.