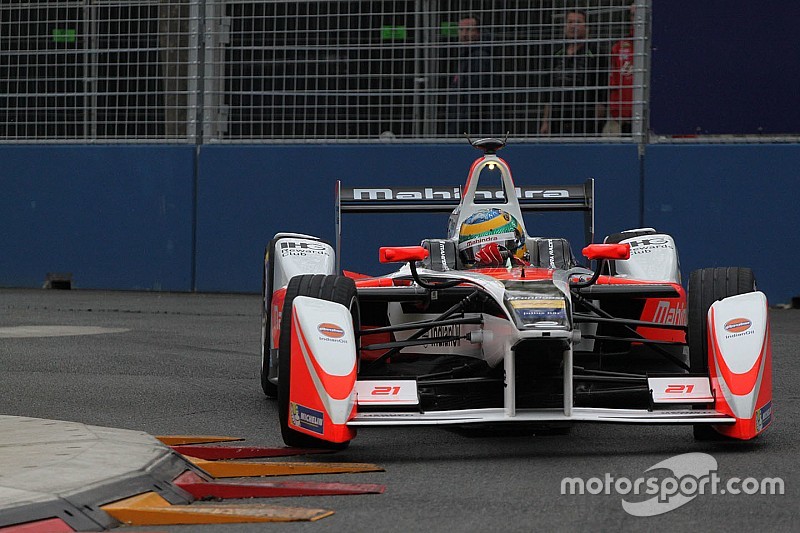 In the post-race weekend debrief, Mahindra Racing's chief engineer Vinit Patel looks back on the mixed results in the inaugural Paris ePrix, for the Indian squad.

With no shakedown prior to the race day, the teams had just the two practice session to get used to the conditions in Paris, which was far from ideal, as the temperature ran below the 10 degrees mark.

However, the Mahindra duo stacked up a good number of laps, with Bruno Senna, in particular, looking strong for a top six run.

The qualifying, though, was a miss for the team as Senna was 11th, while Nick Heidfeld crashed out, due to his own mistake.

Starting from the back, the German was unable to score points with the circuit posing a stiff challenge for overtaking.

Thus, the team opted to go for Plan B - to secure the fastest lap of the race and two points, which they did.

While Senna's strong pace got him two places, into the points as the Brazilian finished ninth, after a safety car period, which truncated the team's strategy advantage.

Heading into a new track and destination, what was the pre-race expectation on the basis of simulation run?

Vinit Patel:  We carried our normal simulator preparation after getting the track information from Formula E. It is a bit harder [in a new circuit] because you have no idea about the state of the supply and once the track is built up, some compromises are made.

When we laid down our plans, we were hoping to challenge for top six and push for a podium, a bit like Long Beach.

With no shakedown, practice runs becomes all the more important to learn the track?

VP: Yes, the lack of shakedown meant, the first practice was to give the drivers as much track time as possible and in Formula E, apart from the layout being unknown, surfaces are also unknown.

Paris was typical, where you had surfaces which was newly laid having fresh tarmac, and some places were historic Persian street, so a lot of bumps which affected certain braking and traction areas.

What happened with Nick in qualifying with the crash?

VP: Unfortunately, Nick just pushed a little bit too hard, if he had completed the lap, he would have been just in front of [Sebastien] Buemi on the grid around P6/P7.

But yes, he made a very small mistake, it was his own error and he was quite open to admit it afterwards, but we want the drivers to push and take as much and this time he just overstepped the mark.

Bruno had a great time in FP2, we were hoping for the same, but having a lack of build lap caught him out, as well the change in grip condition.

Because getting tyre warming was quite hard, as the ambient temperature in Paris was low [perhaps the coldest Formula E race we have had].

Take us through the race plan and the outcome?

VP: With both drivers we wanted to go a lap longer as we did, with Nick we were hoping that he would get some positions [at the start] and get close to the midfield to battle for the points using the strategy advantage, but unfortunately with the FCY, some of the advantage was negated.

It wasn’t a long enough to take a big change in strategy and so we stuck to the plan, but the track layout being narrow, posed a challenge to overtake for Nick.

Bruno was in the points, quite comfortably, he would have made few more positions had the safety car not come out at the time it did.

With Nick we relaised we couldn’t make more headway, after the pit stop we focused on getting fastest lap, which he did excellently, so we got our first fastest lap as a team, which is a good achievement.

Going for the fastest lap was a team decision, we all have it in our pre-race plan, especially when you start from the back of the grid, once you get in certain position into the race, we then want to maximise the opportunity available to us.

Nick was making progress but we thought we were reasonably a bit behind the points scoring position in terms of laps remaining, so it was the case of let’s take what we can, if we can get it that is two points which is good from where we are and it was the right decision.

Satisfied with the weekend overall and how do you now look at the championship fight?

VP: Formula E is a bit gleeful and a bit bittersweet sometimes, because when you look back, it was just really a small mistake, we aimed for top six and even podium owing to our race pace.

If not for the mistake in qualifying, we would have had a great weekend, but all in all damage limitation, with all the points scored, we have consolidated our position in the championship.

The top four looks like have got the margin, but you don’t know if we have a strong finish and they have some problems, one race can change things around. We are not discounting challenging cars in front because of our pace.

We would have been in the top six mixing with those cars in the first place, so it looks like a big gap, but we still have plans to close it down, we still want to maintain our advantage over fifth place.

Looking ahead to Berlin, new track, what are the chances?

VP: Looking at the sketches, it seems like, it has a lot of hairpins involved and lot of straights, so it looks like a bit of compromise in the set-up with straight line speed, as well as maximing lap times.

It will be a bit of a level playing field, same as Paris, but the top teams will always be in front. It looks interesting with Lucas di Grassi on a strong run and Renault and Buemi slightly on the backfoot.

Venturi is in form and both Virgin cars too, it could be an exciting race as we head towards the season finale.

Finally, tell us about the collaboration with Magneti Marelli?

VP: Our partnership with Magneti Marelli is mainly for M3Electro which will be revealed shortly as the season three development is finished. They have been planning away in the background for over 18 months, at Magneti they were already developing Formula E powertrain.

We were the primary partners for few months now, they have been fully integrated with our engineering team and make sure the solution is concise with everything we have learnt in two seasons and use the experience of Formula 1 power electronics, KERS system.

It is going to be a leap in the technology for us, it is going to be revolution. We have team on both the season's car and so we collaborate with any learnings from the season two is shared straightaway and vice versa.