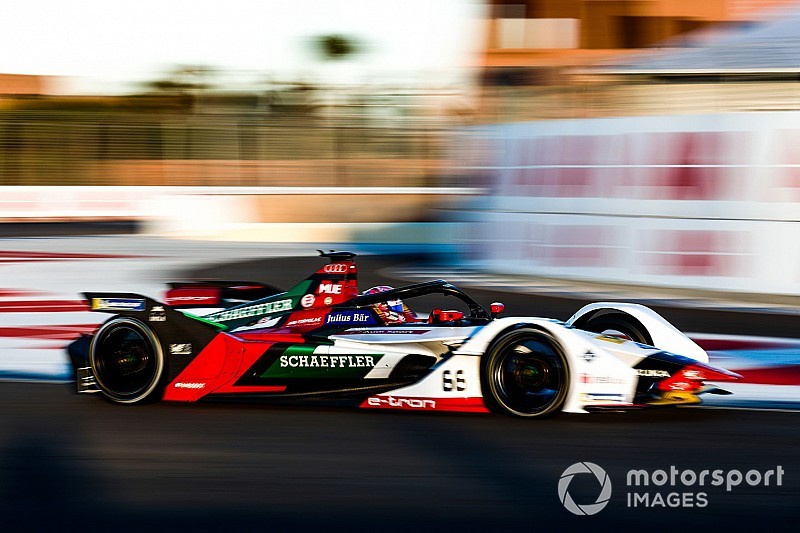 Muller topped both the morning and afternoon running, with a best time of 1m17.532s in the first session and an overall fastest lap of 1m17.074s that he set late in the afternoon.

Rossiter ended up just 0.115s behind Muller’s best time of the day, having both of Techeetah’s cars in the afternoon as the team wanted to have continuity across its machines to validate a test it was running.

That meant Tatiana Calderon did not drive in the afternoon after she had set the second fastest time in the morning, 0.142s slower than Muller in the session, enough for sixth overall.

Fuoco wound up third fastest in the sole Dragon entry.

Ex-Formula 1 driver Felipe Nasr appeared on the official entry list for the second Dragon car, but he did not take to the track at any point during the day, although he was observed in the Marrakesh paddock.

Nyck de Vries moved to the top of the times towards the end of the afternoon running, but was eventually shuffled down to fifth for Virgin Racing, ahead of Jann Mardenborough (Nissan e.dams).

De Vries lost 90 minutes in the morning after damaging his rear suspension on a kerb.

Behind Calderon in the combined times came Bruno Spengler (BMW Andretti) and HWA’s Raffaele Marciello, with Arthur Leclerc and Norman Nato rounding out the top 10 for Venturi.

Nato caused the second of the morning’s red flags – the first was called out so debris could be removed from the track – when he stopped with a transmission issue midway through that session.

Jamie Green caused a late red flag in the afternoon when he crashed his Audi at Turn 7, causing damage to the rear of the car.