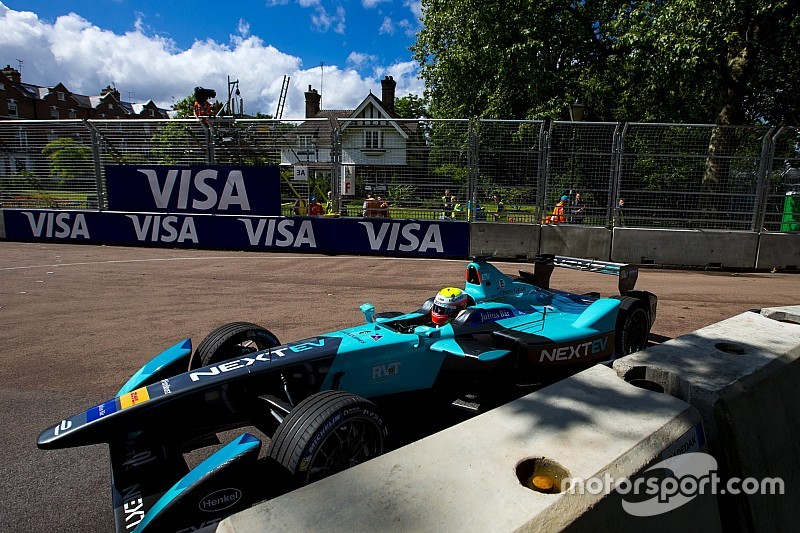 Nelson Piquet Jr was able to pick up a point for finishing tenth, while Oliver finished just out of the points in 11th.

The 2015/16 FIA Formula E Championship came to its conclusion today, with round ten taking place in Battersea Park, London, UK. Both NextEV TCR Formula E Team drivers Oliver Turvey and Nelson Piquet Jr qualified in the top ten, in fourth and ninth respectively. In an action-packed race, littered with incidents and safety cars, Nelson was able to pick up a point for finishing tenth, while Oliver finished just out of the points in 11th.

Nelson Piquet was drawn out in qualifying group 1 and, once drivers from all four groups had set a time, found himself starting the race on the fifth row from ninth. After the incident on lap one between Buemi and Di Grassi, he moved up to seventh and then up to sixth on lap seven when Bird retired. After the pitstop, Nelson was in seventh place, but over the closing 12 laps he moving down to tenth place after slowing to conserve energy, and crossed the line in that position.

For the second race in a row, Oliver Turvey was able to progress through to Super Pole in qualifying after setting a great time in qualifying group four. He set the fourth fastest time to line up on the second row of the grid. At the start of the 33-lap London ePrix, the Brit initially fell back, but then moved up to fourth again when championship contenders Lucas Di Grassi and Sebastien Buemi collided on the first lap. By lap 12 he had moved to sixth, but was then promoted to fifth when Sam Bird had technical issues. After the pitstop, Oliver was in sixth, and maintained position during the first half of second stint. Unfortunately he lost positions in the last three laps of the race after brushing the wall and suffering a puncture, falling to 11th.

Nelson Piquet Jr (Car #1): “The race today was okay. I tried to keep position while saving as much energy as I could but we couldn’t hold off the guys behind so, towards the end of the race, I backed off a little bit and had to give the positions. The good news is that we finished the race and still got a point, and now we will work hard in pre-season testing to have a much more competitive car for next season. I’d like to say congratulations to Sebastien Buemi, he did an amazing job to win the championship this year and I hope he enjoys it!”

Oliver Turvey (Car #88): “I was able to really nail my qualifying lap. It was easily my best lap of the season and it was good to be able to get through to Super Pole on merit. I lost two positions at the start as got too much wheel spin, being on the dirty side of the track. I was able to hold position and was pushing every lap to the maximum as we were losing time under acceleration. The team did a great job at the pitstop and I was able to hold position. I was pushing hard to keep the Dragon cars behind and just brushed the wall and it caught the tyre rim, bent it and the tyre went flat. It was a shame not to get the result, but I’m happy with the pace with the pace over the weekend.”

Gerry Hughes, NextEV TCR Formula E Team: "What a thrilling end to the second season of Formula E. We have been able to end the season taking away some positives, which will create some good momentum going into off-season testing. Oliver was able to extract maximum performance from the car in qualifying, making it through to Super Pole twice in succession this weekend, and we had both drivers in the top ten for qualifying today, Nelson scored the fastest lap yesterday and got a point today, so the team was able to come away with three points. We’ll now focus on preparations for next season.”