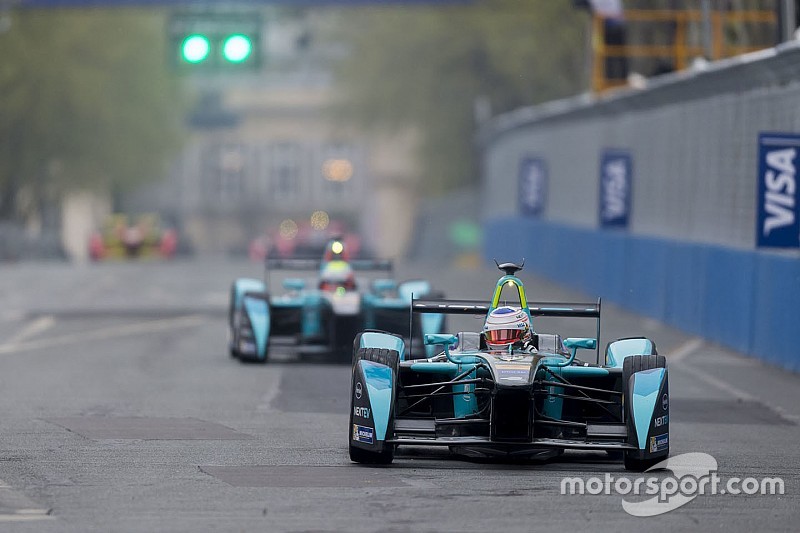 In the race, Oliver Turvey finished 13th while Nelson Piquet Jr was forced to retire after a suffering a technical issue.

The seventh round of the 2015/16 FIA Formula E Championship took place today around the stunning city centre streets of Paris, with the race in the French capital marking the start of the European run of races through to the end of the season. The NextEV TCR Formula E Team had a positive morning, with an encouraging practice pace, followed by its best combined qualifying result of the season. In the race, Oliver Turvey finished 13th while Nelson Piquet Jr was forced to retire after a suffering a technical issue.

Oliver had a successful qualifying session, setting the seventh fastest time overall to line up on the fourth row of the grid. In the 45-lap race, Oliver was initially able to gain a position, moving up to 6th, then spent several laps fending off an advancing Sebastien Buemi, who eventually passed him on lap nine. Over the following six laps he lost position to Robin Frijns and Antonio Felix da Costa, and was in ninth place when he pitted. After the mandatory stop, which he took on lap 24, he emerged in 12th position, then lost a position on lap 39. He crossed the finish line in 13th position.

In qualifying, Nelson set the ninth fastest time, meaning the team secured its best qualifying position of the season, with both drivers in the top ten. On lap one he was relegated to tenth place and maintained position until lap 15. He then experienced a loss of power from lap 15, losing positions, and was forced into an early pitstop on lap 17 to change cars. He began his second stint, but due to having to change cars earlier than planned, he did not have enough energy to last until the end of the race, and so was forced to retire on lap 41.

The next race will take place in Berlin on Saturday 21 May.

Oliver Turvey (Car #88): “I had a good qualifying session and it was a surprise to be ahead of Buemi! I had a great start and moved up to P5 on the first corner. The opening laps were strong, but then it became apparent that the other cars around me had a better pace, so the guys in front started to pull away, and I had to start to defend from the cars behind and had some good battles on track. Unfortunately we had a poor pit stop so lost a few places and then during the second stint I pushed hard to maintain position. However we can take the positives of a strong qualifying away with us, and look ahead to the next race."

Nelson Piquet Jr (Car #1): “The atmosphere and crowd today in Paris was amazing and I am very happy to be racing here. No doubt about it it’s easily gone straight into the top three, if not the best overall event. I loved the track, it’s immediately become one of my favourites to drive, along with Moscow and Monaco. Unfortunately we don’t have the pace to be fighting at the front, but I say a huge congratulations to everyone involved in putting this event together.”

Martin Leach, President, NextEV: "We achieved our strategy in qualifying to get both cars into the top ten, which was good preparation for the race, and our strongest qualifying result of the season so far. Sadly we had a technical issue with Nelson's car and a slow pitstop with Oliver, which meant overall a disappointing race, but we will come back fighting next time."