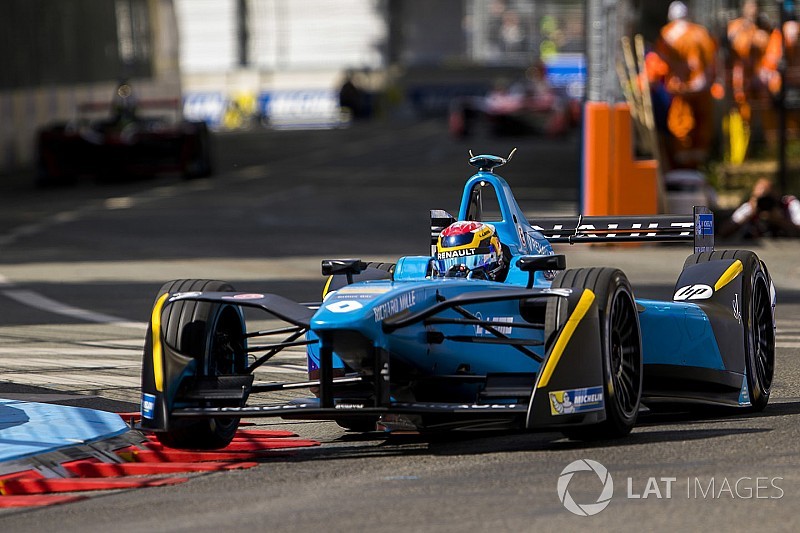 Sebastien Buemi produced a best lap of 1m02.319s in a thrilling Super Pole session to take pole for the Paris ePrix.

The reigning champion took his second consecutive pole position by just 0.006s from rival Jean-Eric Vergne in a tense finale to the one-lap session.

Parisien Vergne missed out on getting the first pole position for the Techeetah team by the slenderest margin in Formula E history as the evenly-matched pair went head to head in the qualifying showdown.

“I am relieved, we worked very hard to improve our performance here at this track,” said Buemi. “I had a few mistakes in the last sector but we did a good job and I am super happy.”

Jose Maria Lopez set the third-best time in his DS Virgin DSV-02 with a 1m02.640s lap but was placed under investigation for accidentally using too much power on his outlap after changing the setting by mistake.

He has not been penalised although tweaking the setting back and forth has damaged the battery, which needs to be changed before the race.

Oliver Turvey again made Super Pole to ensure a 100% success rate for the NextEV team this campaign. He set the fourth-best lap but will be shuffled back down to a 14th starting position due to a penalty for changing a motor in one of his cars.

Esteban Gutierrez claimed his best qualifying result since he entered Formula E with fifth, but his Super Pole session ended in frustration as he locked his Techeetah Renault’s brakes into Turn 7 and disappeared down the escape road.

Buemi had also claimed the fastest time in the earlier group sessions with a 1m02.171s lap. This was a full 0.5s quicker than the next best time in his group, which was set by Mahindra's Felix Rosenqvist.

Again, the times were slower than at the corresponding qualifying session last season, which some of the drivers attributed to some subtle changes in the track surface and the new-for-season-three Michelin tyres.

Rosenqvist's teammate Nick Heidfeld produced a late lap good enough for sixth on the times, as he beat the Swede by 0.006s - and he will thus start fifth due to Turvey's penalty.

There was disappointment for Lucas di Grassi, who rued a lack of grip and will start the race from 13th position on the grid. His teammate Daniel Abt was a couple of tenths away from his teammate and lines up 16th, with newcomer Tom Dillmann a spot ahead.

Last years pole-sitter Sam Bird had a disastrous qualifying session and was 1.4s away from the outright group session pace. As a result, he starts a despondent 18th in his DS-Virgin DSV-02.

Stephane Sarrazin suffered a shutdown of his powertrain in the group session to spoil his attempt and, as a result, the Venturi driver starts from the rear of the grid.