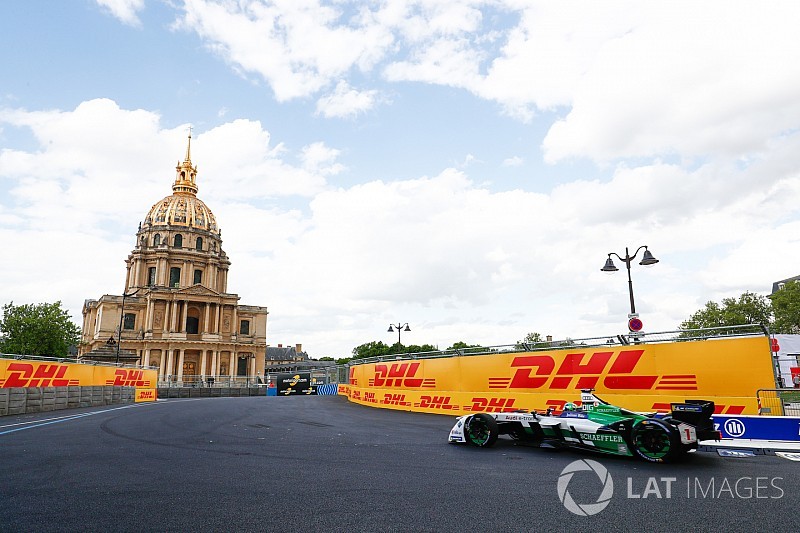 Audi racer di Grassi was the only driver to set a lap within the 61-second bracket, as he finished 0.191s faster than current championship leader Jean-Eric Vergne in FP2.

Both the 45-minute FP1 session, topped by DS Virgin Racing’s Sam Bird, and the 30-minute second practice were halted by red flags – with Jaguar’s Nelson Piquet Jr hitting the wall in both sessions.

Local hero Vergne topped the FP2 times after the initial laps had been completed with a time of 1m01.560s, before Mahindra’s Felix Rosenqvist – who clattered into the barriers at Turn 10 early on in FP1 and brought out the day’s first red flags – went 0.4s faster using his full 200kW mode.

With eight minutes remaining, Piquet, who had crashed heavily at Turn 2 in FP1, hit the wall as he went wide through the long Turn 5 at the far end of the circuit.

The series one champion is having to have the car he crashed in FP1 rebuilt around a new tub, and he completed just three laps in FP2 before his second incident.

When second practice resumed with just three minutes left on the clock, Vergne and Mitch Evans pushed Rosenqvist down the order before di Grassi usurped them both as the chequered flag fell.

Rosenqvist ended up fourth in the combined practice times ahead of Daniel Abt and Oliver Turvey, with Bird seventh, while Piquet’s best time in FP2 was good enough for eighth place.

Sebastien Buemi, who slid into the barriers at low speed approaching the pitlane entry midway through FP1, was ninth, as Techeetah’s Andre Lotterer rounded out the top 10.

Ma Qing Hua – making his first appearance for the NIO squad after replacing Luca Filippi for this event – was slowest in both sessions and wound up 2.239s adrift of di Grassi’s best overall effort.