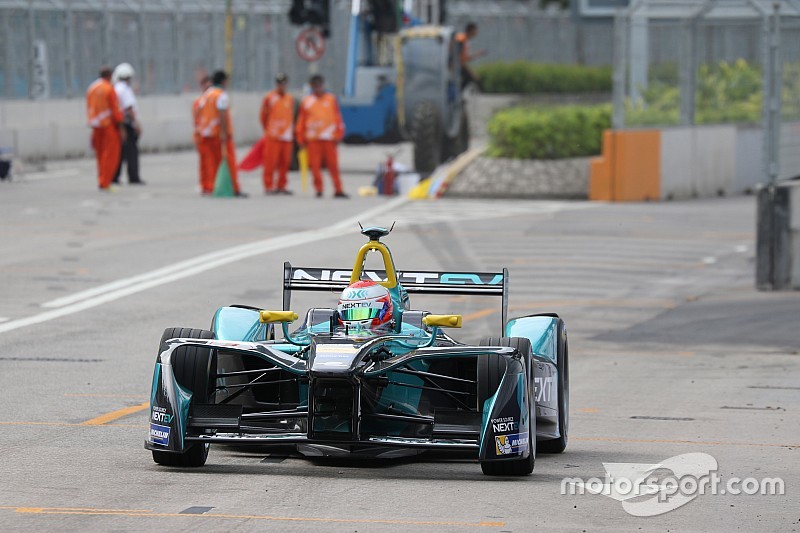 Nelson Piquet Jr believes he and his team NextEV missed out on a good opportunity for a top 10 finish in the Hong Kong ePrix, after pitting on the lap when the safety car came back into the pits.

The season one Formula E champion led the early laps of the race from pole position, but lost the lead avoiding Jose Maria Lopez’s broken suspension-induced accident at the turn three chicane.

Piquet said that the call to pit him a lap after most of the other frontrunners compromised his race significantly.

“That [the incident avoiding Lopez] actually only lost about five seconds or so, but our strategy lost maybe 20 seconds as they pitted me on the wrong lap,” said the Brazilian.

“But the start was good, I maybe got a bit lucky as Oliver [Turvey] held back some of the guys and I think that helped me build a bit of a cushion and it help me have some clean and free laps.”

Piquet believes that the bigger picture of the race rather than the qualifying pace shown this weekend is what the team need to major on ahead of the second round at Marrakesh next month.

“Qualifying is all about getting the tyres and the brakes warm and really nailing a lap,” added Piquet.

“Today what we saw was Oliver doing a good lap and I did a good one and we locked out the front row. I think we will qualify well, we showed that last year.

"It is the efficiency and strategies and all those things that is the more complicated part.”

Meanwhile, DS Virgin driver Bird lost the chance of at least a podium finish after failing to get away from his car change pitstop.

The three-time Formula E race winner led after Piquet had to avoid his crashed teammate Lopez on lap 17.

“We don’t know what the problem is yet. Lots of things were going on, but we don’t know precisely what went wrong,” said Bird.

“I think we would have fought back as we had so much energy. In the second half of the race I was quick and could cruise past people. I must have gained a net 20 seconds.”

Bird’s race was effectively ruined by the problem which wouldn’t allow him to leave the pits, but he would have lost track position anyway due to pitting several laps later than Buemi and others in what became the leading group.

“We were on energy target and we were ahead of Sebastien [Buemi],” continued Bird. “I was able to get past Oliver [Turvey] early doors.

"I had to get him quickly, as he wasn’t quick at that stage, and I managed it. Without the safety car it would have looked good for us, but it wasn’t to be today.”

Frijns: "I thought my weekend was over"