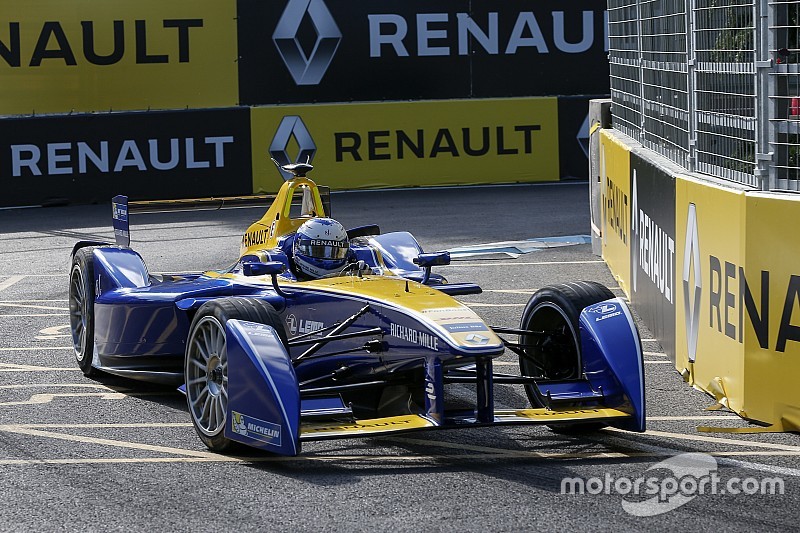 Renault e.dams extended its lead in the FIA Formula E championship with an emphatic victory for Nico Prost in the first race of the weekend at the Visa London ePrix. The Frenchman started from pole position and dominated the 33 lap race to win by over five seconds from Bruno Senna. Sébastien Buemi kept his championship hopes alive with a fighting fifth position, just behind championship rival Lucas di Grassi. Renault e.dams now has an 37 point advantage over Abt Schaeffler Audi Sport while Séb is now three points behind di Grassi – meaning everything is to play for in the final race of the season tomorrow.

Nico enjoyed a near-perfect day. He topped the timesheets in the first non-qualifying practice and followed it up with third position in the second practice. Picking the first session in the group qualifying lottery initially looked unfortunate, but it quickly proved to be a lucky draw as Nico was able to set the quickest time of the session as the rain came down after the conclusion of his group. Starting last in a drying Superpole session, Nico cruised to pole position for the first of the two London ePrix this weekend.

There is never an easy race, but it doesn’t get better than this one!

In the race Nico was able to have a clean getaway from the line and set about building a healthy lead over second-placed Bruno Senna. He was never headed; a smooth car change saw him retain the lead and even a last-gasp safety car could not stop his march towards his second-ever win in Formula E. He crossed the line more than five seconds ahead of Senna, taking 28 points to move into third position in the drivers’ championship with one round remaining.

Sébastien Buemi fought every lap of the race to recover from cruel luck in qualifying. The Swiss driver had started the day well, with third fastest in the first practice session and the quickest time in the second. As a Q3 qualifier, he however fell foul of the heavy rain that arrived just before the start of his session. On a damp, slippery track he could only muster the 14th quickest time with title rival Lucas di Grassi 11th.

With the gauntlet firmly laid before him, Séb started aggressively and immediately took three places to move into 11th overall. In two laps he took Loïc Duval and then Nick Heidfeld to find himself tucked up behind di Grassi. While di Grassi eased past his team-mate Daniel Abt on lap 5, Séb found himself bottled up behind the German in ninth. Lap after lap Séb tried to find a way past, and an opportunity finally presented itself on lap 15 when Sam Bird lost a position to Abt and Séb squeezed through past both to take seventh.

Di Grassi was the next target but again Séb could not find a way through on the tight, sinuous Battersea Park circuit. There was almost a chance when di Grassi broke his front wing on lap 26, but the Brazilian kept going and again Séb’s moves could not stick. The safety car on lap 30 when third-placed Oliver Turvey hit the wall gave scant reward, but Séb was able to gain one place to fifth when Bird dropped back on lap 31.

Nico’s win and Séb’s fifth place adds to Renault e.dams’ tally of points. The team now has an 37 point gap over ABT Schaeffler Audi Sport going into tomorrow’s title decider. Séb has lost a little ground to di Grassi in the drivers’ race, with 150 points to di Grassi’s 153 with just one race remaining, but there is still everything to play for in both championships.

#8 Nico: “That’s the kind of race you always want: to start from the front and then just control it. It was fantastic. There is never an easy race, but it doesn’t get better than this one! I didn’t know about everything going on behind me, I just stayed focussed myself as the worst that can happen in this situation is that you mess up. I was just counting the laps and trying to keep it on the track to get to the end as the win was there. When the safety car came out I did have a swear word or two, but in the end we had a fantastic car and I was able to pull away very easily again. We can be pretty confident tomorrow now. To have a back to back win would be fantastic, but the track changes a lot dependent on the weather conditions. We have to concentrate and make sure we score the maximum points we can to keep the teams’ championship. For me, I will try to help Séb where possible as well.”

#9 Sébastien: “Unfortunately I had rain during my qualifying this morning and obviously I didn’t qualify as high as I would have liked, but it was the same for Lucas so I didn’t really mind. I was really quick in the race. I had a lot of energy to use but sometimes being quick isn’t enough, especially on this track where it’s very difficult to overtake. I struggled to attack Daniel, who was acting like a bodyguard for Lucas and I had to make a move that was safe enough. When Lucas had the broken front wing he was very slow. I had two opportunities to pass him but because his front wing was damaged I didn’t take the risk as I thought he would get a flag for him to stop – but that never happened. I feel that there’s been a lack of consistency today; in Berlin they called in Sam Bird immediately when his wing moved just a little bit whereas today Lucas wasn’t called in. The objective for us now is to have a clean day on Sunday. Of course we want to finish ahead of our main opponents tomorrow and for sure I also think a lot about the drivers’ championship. I have the speed to win so let’s see what will happen.”

Vincent Gaillardot, Renault Sport Project Leader: “We showed this weekend that the improvements brought to London have worked perfectly. We saw that Nico was able to manage his qualifying flawlessly and his race safely. Of course due to the way the race unfolded and the nature of the track Sébastien wasn’t able to overtake easily but the potential was there and the car is competitive. This is good for tomorrow. We have made a step towards our objective and today’s result is positive. We will work this evening with a view to optimise the package we have and prepare for Sunday.”

Jean-Paul Driot, Senior Team Manager: “It was a great result for Nico today and I’m very happy for him. He has had an exceptional day from 08:15 this morning until the chequered flag. I’m very pleased that he’s found his self-confidence again and today he’s really shown it. We were a bit frustrated by the fact that we had to start the race with Séb so far down the grid because of the weather conditions he had in qualifying, and luckily he was in the same group as di Grassi. I thought that they put on a very good show in today’s race but I’m a bit frustrated at the same time because Abt was hard on us and almost dangerous. We also felt that there has been a lack of consistency with di Grassi having not been called in when his front wing broke when we had been earlier this season, but that’s racing. We still have two championships to fight for tomorrow. Sunday will be extremely interesting and the challenge remains very high.”

Alain Prost, Senior Team Manager: “We’ve witnessed two races in one today. The race at the front with Nico, then Séb’s behind him. Nico had a great day and was strong from the first few laps he did this morning. Séb’s day unfolded differently as he qualified in rainy conditions and he and di Grassi started the race much lower on the grid. We were battling for both championships at the same time today. It’s not ideal but we have managed to consolidate our position in the team’s championship and lose very little in the driver’s championship. We need to get Séb in the position to win tomorrow and of course we are still focused on both titles. These are very special days that are very intense. We are happy with today’s result and a big well done to Nico, who has been fighting back these past few races and who was on top of his performance today.”

Formula E title decision to be produced in last race