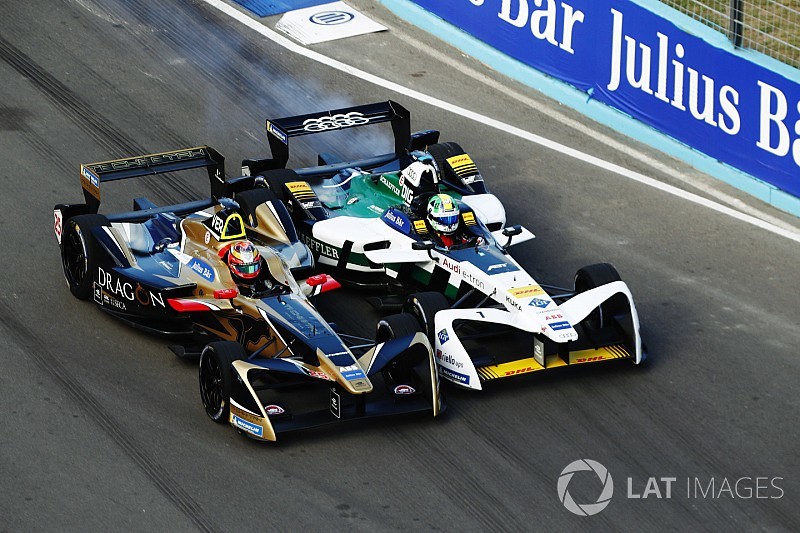 Techeetah driver Vergne headed the pack throughout the race from pole, which he was handed just 30 minutes before the race as di Grassi was demoted following a long post-qualifying investigation for cutting a chicane during Super Pole.

Sam Bird shot up the order to take third place, ahead of the equally hard-charging Mitch Evans, who was also demoted from qualifying for a weight distribution issue that meant he lined up 16th.

At the start, Vergne made a lightning getaway but could not escape di Grassi’s clutches, the pair's battle raging either side of a safety car period caused by Nick Heidfeld stopping on-track.

The duo both pitted on lap 19 of 37, with Vergne keeping the lead throughout the car swaps.

Di Grassi mounted a major attack approaching the final chicane on lap 21, but had to slow to avoid hitting the wall. The reigning champion charged back to Vergne, where he once again got stuck.

Bird made it a three-way scrap for the lead late on after making a rapid getaway from ninth, emerging from the pits in fourth place ahead of DS Virgin Racing teammate Alex Lynn.

Bird made it up to third when Daniel Abt had to pit unexpectedly for a second time with what appeared to be a seatbelt problem.

Back at the front, Vergne survived contact with di Grassi at the final corner with three laps to run – and a further clash at Turn 1 on the next tour.

The sometime Formula 1 driver held on to win by 0.447s ahead of di Grassi, with Bird dropping back to 2.1s further back on the last lap.

Vergne's victory means he now leads the standings by 30 points over Rosenqvist, who also battled his way up the order after a poor qualifying session to come fifth, with Bird an extra three points back.

Vergne's Techeetah teammate Andre Lotterer faded to 12th despite a promising start, while Abt was eventually classified 14th.

Sebastien Buemi and Nelson Piquet Jr were the other non-finishers after making premature car swaps.

Buemi hit the wall the high-speed Turn 13 right-hander on lap 10 and suffered left-rear damage as he chased Turvey and Abt early on.

Piquet picked up damage on the opening lap and had to switch cars due to a driveshaft problem.