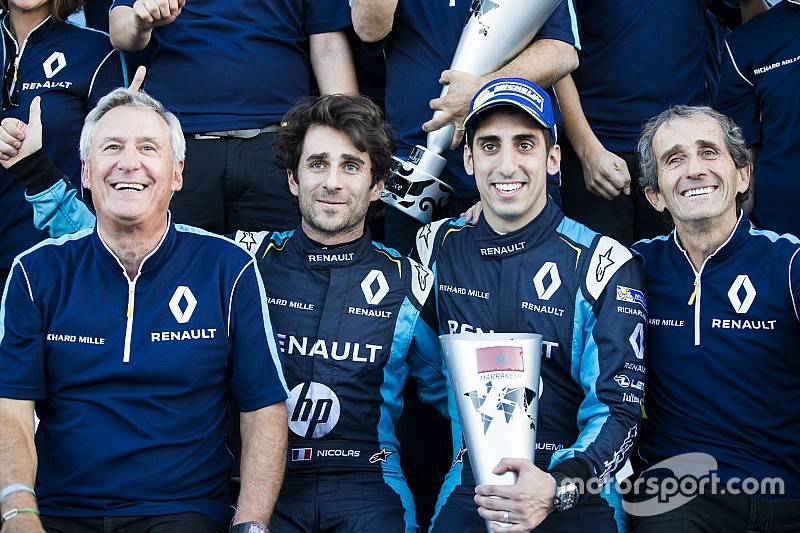 Renault e.dams senior Team Manager Jean-Paul Driot says Sebastien Buemi’s success in the Marrakesh ePrix will be vital to his and the team's chances of defending their Formula E titles.

The co-founder of the French squad also believes that the Swiss driver executed the "perfect race" as he recovered from seventh on the grid to take his second victory in two races.

“We had a clear strategy with always five or six percent better energy consumption than [Jean-Eric] Vergne and [Felix] Rosenqvist, so we knew the one lap extra would be a good configuration for us," Driot told Motorsport.com.

"We saw that and for us it all worked perfectly. We would have eaten Vergne too at the end if he had not had his issues. We executed a perfect race today.”

He added: “Getting these big points is very important early in the season because everything has closed up between the teams now,” he said. “It is not just Audi like last year.

"We now have a much improved competition like DS, Mahindra and the Techeetah team, so to get maximum points is very crucial.

"I am always conservative because we do not know what the next races will bring. We saw last year how quickly things can change in Formula E.

“Usually they [Audi] are better than they showed this weekend. They had issues, I don’t know what they were and I don’t really care, because they are strong opposition and they will be back.

"We have to stay focused and not go to sleep at all.”

Qualifying penalty "out of our control"

Driot also explained that the pre-race penalty for a safety-related infringement regarding Buemi’s fire extinguisher was something beyond the control of the team.

“We think that during qualifying on a kerb that was hit two wires came loose and out and the extinguisher went off,” explained Driot.

“The big problem is that it is under the seat of the driver, and there is no indication or light to show it is empty. And it is gas, not a liquid, so you cannot see a leak.

"It was checked before we ran with the technical stewards and it was all fine, so I assume it came out.

"There is no gain, because we use ballast, as we are below the weight limit without the ballast.

"But safety-wise it was a breach of the regulation, and the stewards understood it was not like we were cheating. It was out of our control.”