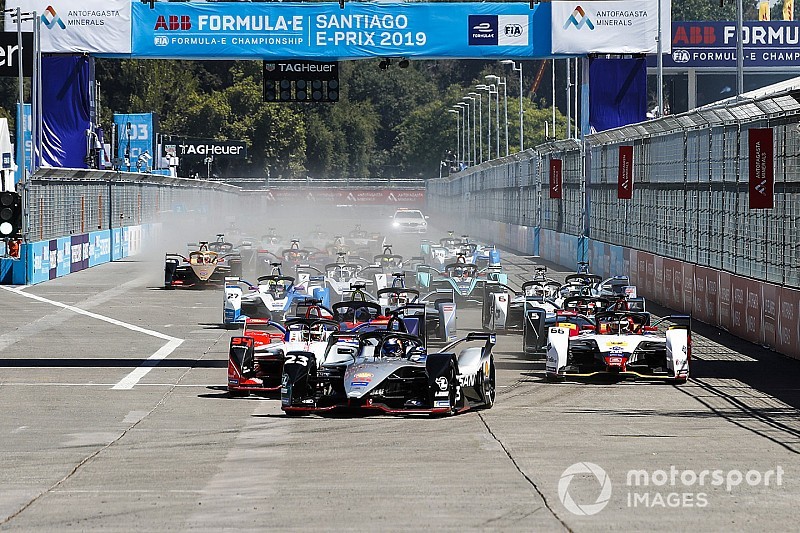 In what was officially FE’s hottest race, 14 drivers finished an attritional race that featured collisions up and down the field, while some drivers – including runner-up Pascal Wehrlein – had to battle battery temperature issues late in the race.

Bird’s victory was briefly uncertain as he faced an investigation for his car possibly being underweight, but it was quickly clarified that no further action would be taken.

At the start, polesitter Buemi led away from pole ahead of Wehrlein, Daniel Abt and Bird – with the Virgin Racing driver mounting an unsuccessful attack for third around the outside of Turn 3, where the attack mode zone is located.

The front four edged away at the front of the pack, with Buemi opting to activate his attack mode for the first time on lap six of what would become a 36-lap race.

He only just held the lead over Wehrlein but shot away as he used the extra 25kW available.

Bird also opted for an early attack mode activation and passed Wehrlein into the first corner at the start of lap 11 to seize second.

Buemi held the lead for much of the race as the top three moved clear of Abt while negotiating two full course yellow periods. But on lap 22, Buemi locked up going through the Turn 7 fast right-hander – where he crashed dramatically in first practice – and slid into the wall on the outside.

That allowed Bird to move into first place – Buemi touring to the pits to retire – with Wehrlein chasing.

Bird opted to take his second attack mode on lap 24 and pulled clear of Wehrlein, but the British driver’s gap never exceeded more than a few seconds.

Wehrlein took his final attack mode with six minutes of the 45 remaining and closed in on Bird over the coming two laps. The ex-Formula 1 driver, in just his second FE start, put Bird under massive pressure as his 225kW advantage ran out before he was warned about managing his battery temperatures.

The order behind the top two changed considerably after the flag, as on-the-road third place finisher Alexander Sims, who had risen from eighth on the grid, was given a drive-through penalty for tapping Edoardo Mortara into a spin at the tight Turns 8/9/10 chicane on lap 14.

That dropped Sims to seventh in the final order, with Daniel Abt, who had fought the BMW driver in the final stages of the race, taking third as a result.

Mortara survived a late fight with Robin Frijns to beat the Virgin driver to fourth, with Mitch Evans taking sixth for Jaguar.

Marrakesh winner Jerome d’Ambrosio went from P20 on the grid to eighth in the final results, with Oliver Turvey ending up ninth for NIO.

Jose Maria Lopez had finished seventh on the road but was dropped down to 10th for exceeding maximum power.

Nelson Piquet took 11th, with Lucas di Grassi ending up 12th in the final order after a 10-second stop-and-go penalty was converted into a post-race time penalty for causing a collision with Lopez.

The Dragon driver was spun around at the final corner shortly before the second full course yellow was called, so Maximillian Gunther’s Dragon stricken car could be recovered from the pit straight.

Oliver Rowland retired late on after crashing into the Turn 4 barrier.

Jean-Eric Vergne and Antonio Felix da Costa – who collided at the final corner on lap eight – also retired in the pits, with the former stopping shortly after he spun at the exit of the Turn 3 attack mode corner.

F1 refugee Stoffel Vandoorne had run in the top five for much of the race before he hit the wall at the exit of Turn 3 in lap 18, with the resulting debris needing to be recovered and causing the second FCY.

The other retirees were Felipe Massa, who stopped in the pits shortly after clashing with Rowland at the exit of the final corner on lap 12, and Tom Dillmann.

Following a post-race investigation, d’Ambrosio and Vergne were handed five-second time penalties for FCY speeding. Vergne’s penalty was inconsequential given his retirement, but d’Ambrosio has lost the lead in the driver’s championship as he is now classified in P10.

As a result of the shuffle, Bird now holds a two-point lead at the head of the standings on 43, with d’Ambrosio down to second.