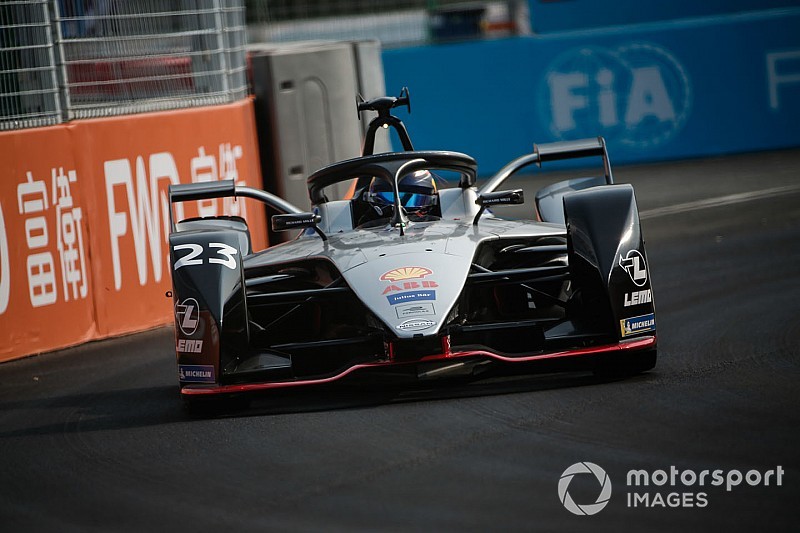 That session-topping time from Buemi came just 10 minutes after he had crashed into the barriers at the exit of Turn 3 – the left-hander where the track’s attack mode activation zone is located.

He appeared to have an issue mid-corner and went nose-first into the barriers as result, but was able to reverse away and head back to the pits for repairs.

Buemi rejoined the action late-on and set the quickest time with just over two minutes of the second session remaining.

Oliver Rowland, who had topped the opening 45-minute FP1 session, set the third fastest time in the other Nissan.

Behind Rowland came Mahindra's Jerome d’Ambrosio and DS Techeetah driver Jean-Eric Vergne, who finished just 0.177s adrift of Buemi’s best effort in fifth despite visibly struggling with the handling of his car during FP1 – where he ended up seventh.

During FP2, the cameras captured Vergne gesticulating furiously towards Jaguar’s Nelson Piquet Jr as they ran through the penultimate corner during the early running.

Lopez was one of several drivers to have a major lock-up at the Turn 8 hairpin, which is likely to be a major overtaking spot in the race

Stoffel Vandoorne (HWA) led Felipe Massa (Venturi) and Andre Lotterer (DS Techeetah) in positions 12-14, ahead of Daniel Abt (Audi) and Robin Frijns, who scraped his Envision Virgin Racing car along the Sanya circuit’s walls on a number of occasions during FP1.

But Frijns did not cause any major damage to his car.

Piquet had to climb out of his car early on in FP2, the reason for which was an FIA-requested halo light battery change, which was confirmed by Piquet’s Jaguar team.

Both Paffett and Wehrlein hit the wall going through Turn 6, which is an acceleration zone right-hand blast that leads onto the long run – officially Turn 7 – heading down to the hairpin.

Wehrlein struck the wall first and appeared to hit it harder with his left-rear wheel, while Paffett seemed to strike it more square-on.

Both drivers were able to recover to the pits.