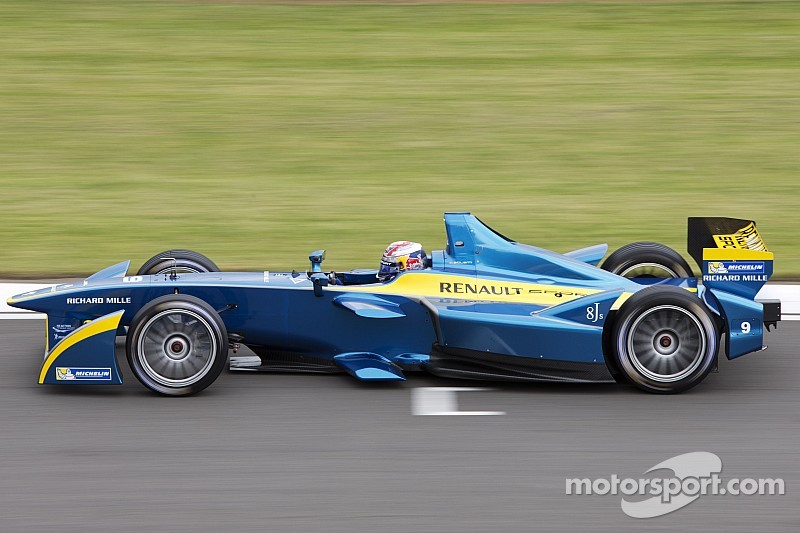 The third day of Formula E testing at Donington Park ended with e.dams-Renault's Sebastien Buemi on top of the charts.

Sebastien Buemi (e.dams-Renault) topped the timesheets for a second time at Donington Park at the end of the third day of official Formula E pre-season testing.

Buemi said: “Today has been good and very productive but it’s not about trying to set the fastest time, it’s about getting a better understanding of the car and the different mapping settings. The car has been reliable all day and the team have done a good job. It’s great to be in a car that you can rely on and know you can push when you need to. We still have a few issues to work on but overall it was a productive session.”

Ex-Formula 1 driver Jerome d’Ambrosio finished second, crossing the line with a 1:32.035s. The Belgian racer spent the day behind the wheel of the China Racing car, building on his experience from the previous week.

Lucas di Grassi, who ended last week’s testing on the top of the timesheets, set the pace in the morning session with teams continuing to focus on battery management and race simulations. The Brazilian set a 1:32.260s to put him third overall.

Dragon Racing’s Oriol Servia stopped on track to cause the first red flag of the day before Sebastien Buemi lowered the benchmark by setting a 1:32.697s, beating his previous best lap by over a second.

Following a lack of running last week, Trulli’s Michela Cerruti managed to get more mileage under her belt tallying 22 laps to record a 1:34.538s. The Italian said: “It's been much better. I’ve done a few laps and can understand a lot more about the tyres and the brakes and how to warm them up. I'm happy with the work we did today. We didn't have any special problems, the next goal is to concentrate on performance.”

Before the lunch break there were several changes at the top of the leaderboard with Buemi edging out Venturi’s Stephane Sarrazin, who finished fourth.

Returning to track for the restart of the session, Mahindra’s Bruno Senna was the first man to set a representative lap time ahead of Nicolas Prost for e.dams Renault. The Brazilian said: “So far I've been very lucky with the car and have been able to fulfil the testing programme and get the car working well. I'm happy with what we've done and what we're learning about the car.”

Argentinean driver Juan Manuel Lopez tested the Formula E car following a number of outings in previous weeks. Lopez had a spin early on but quickly re-joined the track to notch up 15 laps in total.

To view the full times from the day click here.

Is Formula E truly the future of motorsport?