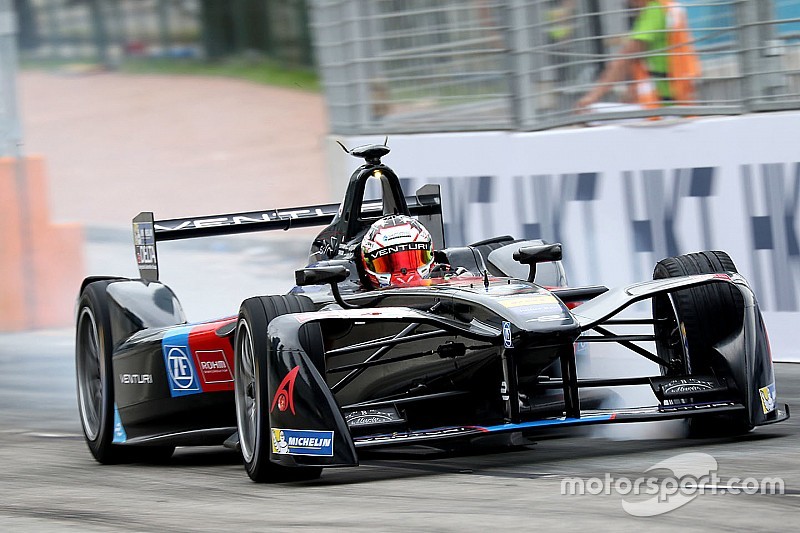 The Venturi Formula E team hopes that the introduction of a new advanced technology can help it to join the frontrunning teams in the championship this season.

New semiconducting silicon-carbide (SIC) diodes are being used on the Venturi VM200-FE-02 in an effort to improve efficiency in the cars.

Developed by global technology company ROHM, the special SIC diodes have made the Venturi’s inverter 2 kg lighter than the one used for season two.

With electric efficiency being increased by 1.7 percent, the volume of heat extraction components has been reduced by 30 percent.

The material is believed to be capable of withstanding higher electric fields than conventional silicon, which results in extremely low losses of power and higher temperature resistance.

Unveiling the new technology in Hong Kong last weekend, Venturi technical director Frank Baldet said: "We are very proud to be co-developing our powertrain with ROHM's silicon carbide technology, which can be used to create a great solution for our inverters.

"Formula E is all about power management, and the partnership with ROHM - the leader in power semiconductors - improves the overall electronics of our car so we can reach higher performance with our electric motors."

With the challenge of Formula E being to find the most efficient way of using the energy provided by the battery and applying it on the road, Venturi believes that the new semi-conducting technology will give it an advantage once it is fully developed.

Speaking to Motorsport.com in Hong Kong last weekend, Professor Burkhard Goeschel, President of the FIA Electric and New Energies Championships Commission, said: “What Venturi is doing is exactly what Formula E teams should be concentrating on.

"The advancements in electrical engineering are great, but in a racing environment the R&D gets accelerated.

"There are a lot of opportunities out there for manufacturers and teams to get integrated with some really exciting and advantageous technology.”

What is SiC technology?

Making power electronics smaller, stronger and faster, Silicon carbide is a compound of silicon and carbon. It is produced using a crystal growth process of sublimation and exposure to high temperatures of about 2,000°C.

Using this technology in power devices, ROHM, a leader in SiC applications, has achieved lower power consumption and more efficient operation. There are several benefits compared to conventional silicon:

STRONGER - Devices with SiC can work with higher voltages and currents, which increases power density and reduces switching losses even under high temperatures.

FASTER - The ultimate outcome of ROHM's partnership with Venturi, the best performance and maximised probability of speed.

Rosenqvist says Formula E his toughest series to adapt to yet