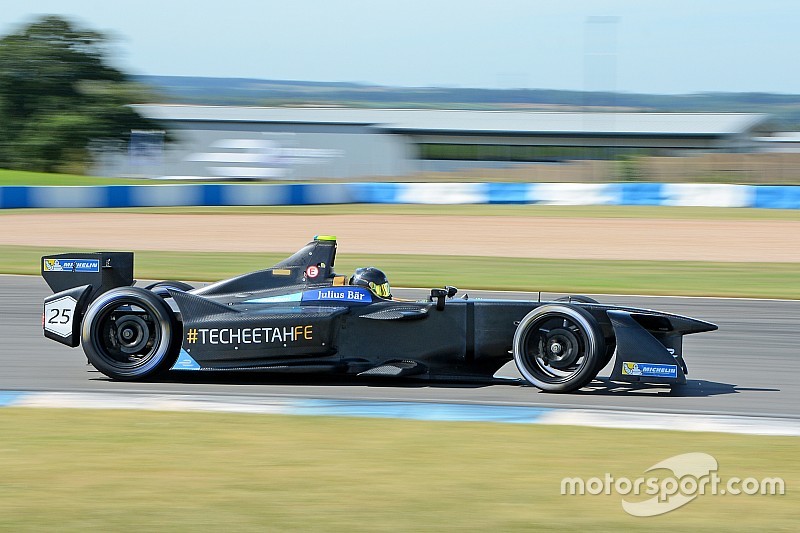 Jean-Eric Vergne ended the second day of public Formula E testing at Donington Park on top of the timesheets, the Frenchman breaking the lap record for the all-electric series in the process.

Unlike on Tuesday, the best times of the day were set in the morning, as three drivers set a time faster than the existing Donington Formula E lap record of 1m29.920.

Reigning champion Sebastien Buemi, who was fastest on Tuesday for Renault e.dams, was first to do so with a best time of 1m29.765s, before Felix Rosenqvist and Vergne lowered the bar further.

The ex-Toro Rosso Formula 1 man, driving the Renault-powered Techeetah entry, ended the morning on a 1m29.634s, 0.085s up on Mahindra's Rosenqvist and 0.131s clear of Buemi.

Those times would stand as the three quickest of the day, followed by Daniel Abt, who topped the afternoon session with a best effort of 1m30.192s in the final half-hour to end up fourth overall.

Sam Bird (DS Virgin) completed the top five, 0.102s slower than Abt in the afternoon, followed by the second Mahindra of Nick Heidfeld, whose best time came in the morning.

Nicolas Prost (Renault e.dams), who was third fastest in the second session, was seventh ahead of Dragon duo Loic Duval and Jerome d'Ambrosio, and Oliver Turvey (NextEV).

New squad Jaguar had a more low-key second day of testing, as Mitch Evans - taking over the second entry from Alex Lynn - set the British marque's best time of the day, a 1m31.267s, 1.633s slower than Vergne.

Evans also suffered a stoppage on track in the final 20 minutes, while an off for Ma Qing Hua, who took over the sole Techeetah car from Vergne in the afternoon, caused a late flag in the dying minutes of the session.