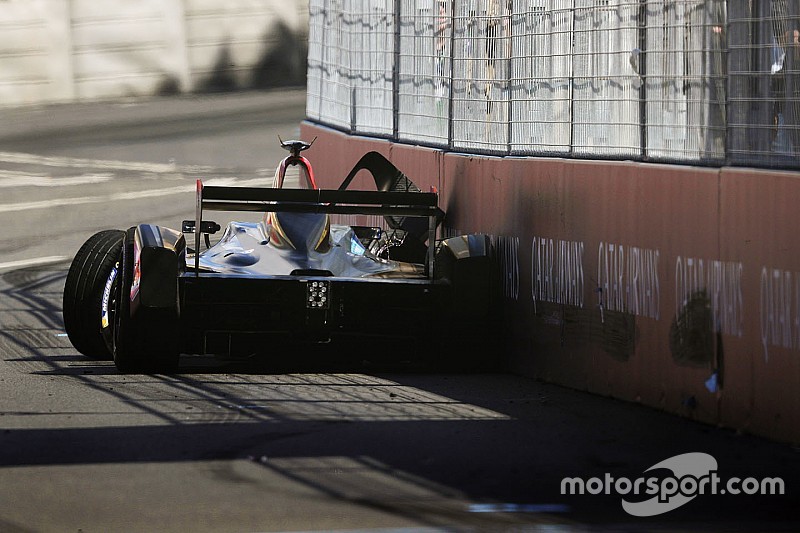 Jean-Eric Vergne believes he could have challenged Sebastien Buemi for victory in the Paris ePrix before his race-ending crash, which was caused by a suspected steering rack failure.

The Techeetah Formula E driver was chasing the Renault e.dams machine of Buemi in the second half of the race when he ran wide exiting Turn 13 and crumpled the front-right of his car against the wall.

Vergne retired on the spot and believes a steering rack problem was to blame as he had “an indication” something was going to go wrong.

“Halfway through the previous lap I suspect something broke because the steering was quite loose, the car was not really turning,” he told Motorsport.com.

“I had worked so hard the second stint to save a lot of energy, I had more than Seb, it’s not fair to say I would have won but I was waiting for my chance later in the stint to attack.

“The car was so much better, I was faster than him in the second stint considering how little energy I was consuming and unfortunately a failure broke all those chances.

“A lot of hard work disappeared in an instant.”

The team had to fit a replacement steering rack after Vergne’s crash in Monaco last weekend with Nelson Piquet Jr.

Vergne’s theory was that a clip came off and that it was not something the team could be responsible for.

“It was absolutely going to come back to me,” he said of the race, having fallen 3.2s behind Buemi in the first stint but got back on terms thanks to a full-course yellow.

“The first car for some reason was a long way off the pace and the second car was so much better.

“I was coming back at him, managing the gap and consuming little energy. I knew I was faster, I could see he was lifting way earlier. I was preparing my attack for later on.”