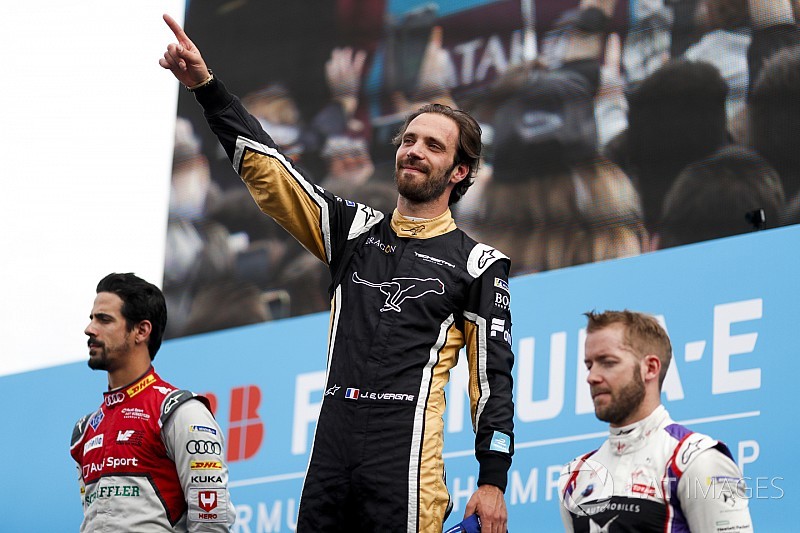 Formula E points leader Jean-Eric Vergne has hailed the turnaround of his Techeetah team after the most "emotional" victory of his career in Paris.

Vergne extended his standings lead to 31 points over DS Virgin Racing’s Sam Bird with a commanding win from pole position in his home city.

It came just two weeks after he struggled to fifth in the previous round in Rome, and the Frenchman praised the way his Techeetah squad had turned things around between the two events.

“It was clearly my most emotional win, by far,” he said.  “If there was a race that I wanted to win this year, it was clearly Paris.

“And to have done it in such a good way today with pole position and race win is absolutely amazing – I cannot be happier, especially [as] it was my birthday this week.

“So it’s been an incredible week and I think I’m going to need a few days [off] my feet before racing again next weekend [at Spa in the FIA World Endurance Championship].

“I have to thank my team – Rome was a tough one for me. Sometimes you have low weekends and Rome was a low on for me.

“That’s always hard for the confidence, but we worked very hard and coming back in Paris shows that we can turn things around."

When asked for his thoughts on his home FE event, which is on a rolling year-by-year arrangement with the electric championship’s organisers, Vergne hailed the track’s location and implementation.

“Rome is an amazing race but the track is not central – it’s not around the Colosseum,” he said. “Here, we have the best location ever on the Formula E calendar.

“The track is hard to overtake [on], but it’s the same in Hong Kong, for example, same in many other tracks. And I think Paris has done an amazing job to create an event that is growing massively.

“To see the amount of fans there were and the level of the organisation [has] increased massively compared to last year – I think it’s developed more beautiful.

“It was a very successful event and I’m happy that the mayor of Paris is backing us to keep moving forward with the Formula E championship and I can’t wait to get back here next year.”

Abt "stood up" to declare Paris overtaking plan to Audi