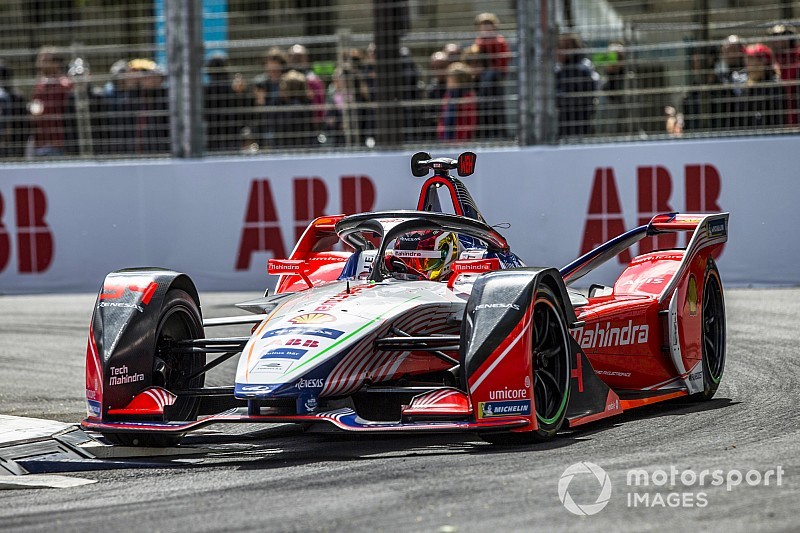 Mahindra Racing's Pascal Wehrlein has hit out at the "unfair" penalty that cost him pole position for ABB FIA Formula E's Paris E-Prix.

Wehrlein had initially become the first driver to take a second pole position in the 2018/19 season, a day after his Mahindra boss Dilbagh Gill stressed that he expected the ex-Formula 1 driver to win in FE for the first time in the upcoming races.

But Wehrlein and teammate Jerome d'Ambrosio were disqualified over a tyre pressure infringement and an FIA document explained that measurements were taken twice "after qualifying and once after Super Pole and [were] between 1.48 and 1.56-bar instead of a minimum of 1.60-bar".

"Even under consideration of the outside temperature of the track and the time the car has been checked after arrival in the pitlane. The tyre pressure was not in compliance with the Michelin Pilot Sport Tyre working range."

Mahindra team manager Joan Orus had previously explained that the cause of the infringement was due to the squad's tyre pressure calibration tool and added there was a "really low advantage" from the different tyre pressure.

Wehrlein told Motorsport.com that he felt being sent to the back of the grid was unfair.

"It’s frustrating [to lose pole] because you would have to say the circumstances of the penalty and how we got there is not fair," said the ex-Formula 1 driver. "To start from the last position after the first is a big difference, which is not relative [to the infringement]."

Asked to explain why he felt the penalty was unfair, Wehrlein said: "Because the tyre pressure was 0.05-bar too low, which is nothing. 0.05, Not 0.5.

"It’s nothing and because I was one of the last cars in qualifying, [the scrutineers in parc ferme] checked the cars in front and [then] my car - they even confirmed it took them 10 minutes.

"10 minutes in these conditions [means] they are cold and the pressure was too low.

"The hot pressure was too low, but the pressure out of the box was fine. We tried to explain this and it was not our fault really. That’s how they decided."

When d'Ambrosio was asked about the performance advantage his team manager Orus had mentioned, the Belgian told Motorsport.com that "you can never quantify things like that".

He then added: "I don’t think it was much but rules are rules and we made a mistake and you have to deal with it and move on. Understand the mistake, move on. "

An FIA source confirmed to Motorsport.com that the normal protocol for measuring the tyre pressure had been followed and reiterated the statement made in the original FIA document.