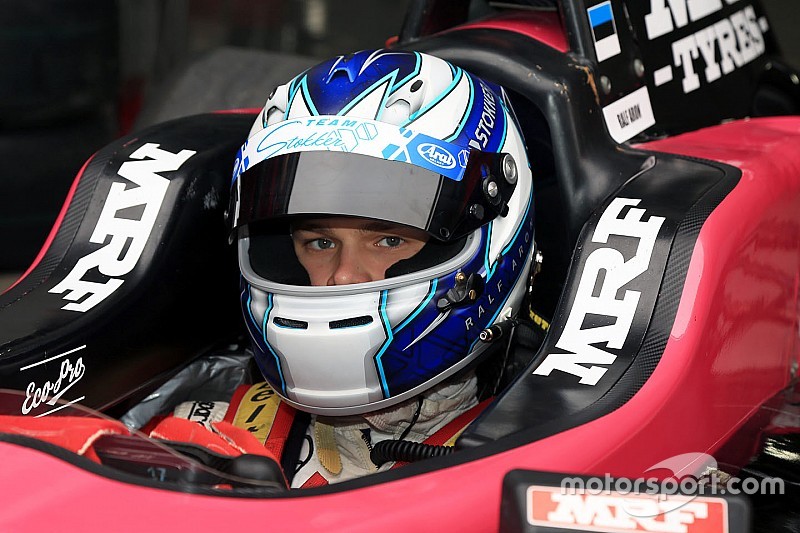 Hitech GP's Ralf Aron says he will draw motivation for the coming European Formula 3 season from his desire to beat his former outfit and the series' dominant force Prema Powerteam.

The Italian squad has swept all the drivers' and teams' titles in the continental F3 category since 2010.

British newcomer squad Hitech was a remote second to Prema in 2016, taking four race wins with George Russell and Ben Barnicoat, and has signed Aron to lead its charge in 2017.

The Estonian will be joined by Russian Nikita Mazepin, who is staying with the British squad for his second season, former GP3 race winner Jake Hughes and Honda junior Tadasuke Makino.

“I have been with Prema my whole time, I love the team, I am close with the people who run it and I need to thank them, we won [Italian] F4 together and then we had a good year in F3," Aron told Motorsport.com.

“Everything’s been good with Prema, but I would like to be the first one to beat Prema in the long time, so I am working hard on that.

“I think I have definitely worked my hardest in my career this winter to accomplish it, trying and doing anything I can to be ready for the season."

Aron first raced for Prema in 2014 in the Italian F4 Winter Trophy ,and joined the team for a full-time F4 schedule the year after, winning the Italian series' regular season.

The 18-year-old then graduated to European F3, where he finished as the second-best rookie (behind Motopark's Joel Eriksson) and took his maiden win at the Hungaroring last year.

“It started really well, we prepared for it good and the team was doing a really good job," said Aron of his first F3 campaign.

"I got my first race win already in round two, but after that I think all the rookies were struggling a bit. When I had my bad rounds, I was still leading the rookie standings, and then the whole team had a bad round in Spa.

“I also made some mistakes in Budapest in Race 3. I really had rookie mistakes I would say, but I am happy that I had done them. I didn’t repeat any of them.”

He added: “I really learned a lot during the season. In the middle of it, I had a really big dip, that’s where I lost all the points, but the end was good again.

“I am not [entirely] happy with the result, I really wanted to win the rookie championship and to be in the top five in the main championship, but I am still quite happy about the season. I think I could do a good job this year."

While Aron has been a Prema man for the past two years, he says he is not downbeat about leaving the Italian team - and that a Hitech move has been on the cards for a while.

“It’s been on my mind for a long time, really, and in Hitech’s mind, we have been talking for a long time already, even before the 2016 season, to be honest.

“So the work has been in progress for a long time, really want to thank Hitech and [team boss] Oli Oakes for giving me the chance, and I love the team, I love the environment, I love everybody in it.

Newey back with Van Amersfoort for second F3 campaign