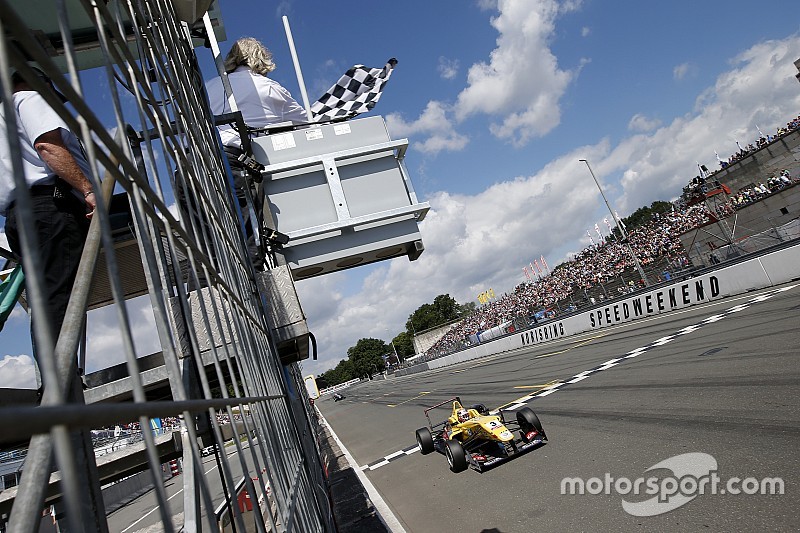 Carlin's Antonio Giovinazzi closed in on the championship lead by taking his fourth win of the European F3 season at Zandvoort.

Having started from pole, Giovinazzi managed to pull away rapidly enough to stay ahead of Felix Rosenqvist, blocking him as they headed into T1.

Behind them, points leader Charles Leclerc passed slow-starting title rival Jake Dennis for fourth but Lance Stroll got the better of Leclerc and Dennis later on.

And things rapidly went from bad to worse for Dennis, as he was handed a drive-through penalty for a jump start and was staring at a fourth consecutive non-score finish.

Out front, Giovinazzi established a cushion of nearly half a second to Rosenqvist but struggled to build upon it for most of the race, with the Swede on his toes all the time.

On lap 15, Rosenqvist had gotten as close to the Italian as he's been all race but failed to make a move and soon dropped back.

The Italian, as such, appeared to be in no danger of losing the lead over the final minutes and eventually took the chequered flag 1.127 seconds ahead of Rosenqvist.

Motopark's Markus Pommer started from third and drove a calm race to finish third, bringing home his first podium finish in the series.

Stroll, who is still hunting for his maiden podium, took his fourth fourth-place finish while Leclerc rounded out the top five.

George Russell was the best of the other Carlin in sixth, ahead of Alex Albon, Mikkel Jensen and Nabil Jeffri, the latter picking up his first points in the championship.

Tenth place went to Brandon Maisano, the third Prema driver in the points.