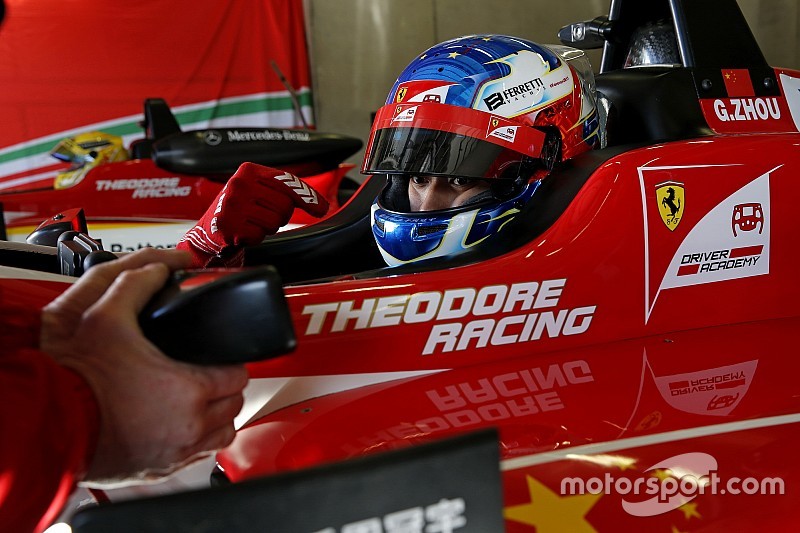 Ferrari junior Guan Yu Zhou won the first race of the Formula 3 European Championship finale at Hockenheim, as Mick Schumacher’s coronation was put on hold by a first-lap collision.

Schumacher was battling Prema Powerteam stablemate – and long-shot title contender - Marcus Armstrong for sixth on the opening lap when he hit the Kiwi through the fast right-hander into the Mercedes Arena.

With his front wing scraping on the ground, Schumacher put a massive squeeze on main title rival Dan Ticktum – although it was merely a diet version of Adelaide 1994 – as they raced towards the final stadium, and then entered the pits to have the wing replaced.

Schumacher received a reprimand and a penalty point on his licence for forcing Ticktum off the track.

The safety car had emerged due to a collision between Alex Palou and Jehan Daruvala as they fought for third – exiting the Spitzkehre hairpin, contact between the two pitched Daruvala into the barrier on the left.

That allowed Schumacher and Armstrong – who had also pitted to have a puncture replaced – to latch on to the field.

While Armstrong returned to the pits to retire, Schumacher raced up to the brink of the points, helped by a shunt on the back straight between Fabio Scherer and Ferdinand Habsburg that caused another safety car.

Schumacher could make it no further than 12th, although could have attacked Julian Hanses for 11th on the final lap had bungling officials not shown the chequered flag a lap early.

Zhou made two very good restarts and left behind his Prema and Ferrari colleague Robert Shwartzman to win by 2.339 seconds.

“I had a good start, but the safety cars were pretty tricky because after the first the drivers know where you will accelerate, so I had to change my technique a bit,” said Zhou.

“But I had great pace and controlled the last few laps.”

Shwartzman had to focus his attentions on Juri Vips, who had taken third from Palou immediately after the Hitech driver’s collision with Daruvala.

Vips briefly made it into second at Spitzkehre on the final lap, but the Motopark man overshot and Shwartzman moved back in front, clinching the Rookie title with second place.

Ticktum got punted wide by Sacha Fenestraz at Spitzkehre in the early going, allowing Ralf Aron to pass both of them.

But Red Bull Junior Ticktum pulled off a good move on Aron after the second restart to reclaim fifth, then put massive pressure on Palou for the rest of the race, but the Motopark driver could not breach the Catalan’s defences.

This puts Ticktum 39 points behind Schumacher going into the second race, meaning he needs at least a podium finish from 15th on the grid to have any hope of wresting the crown from front-row starter Schumacher.

Prema driver Aron held off the Carlin machine of Fenestraz for sixth, while there was a great dust-up for eighth.

Nikita Troitskiy did a terrific defensive job in his Carlin car to hang off from Hitech’s Enaam Ahmed, while Frederik Vesti was hard on their heels to complete the top 10 on his F3 debut with Van Amersfoort Racing.

Hockenheim F3: Vips on pole as Schumacher closes on title