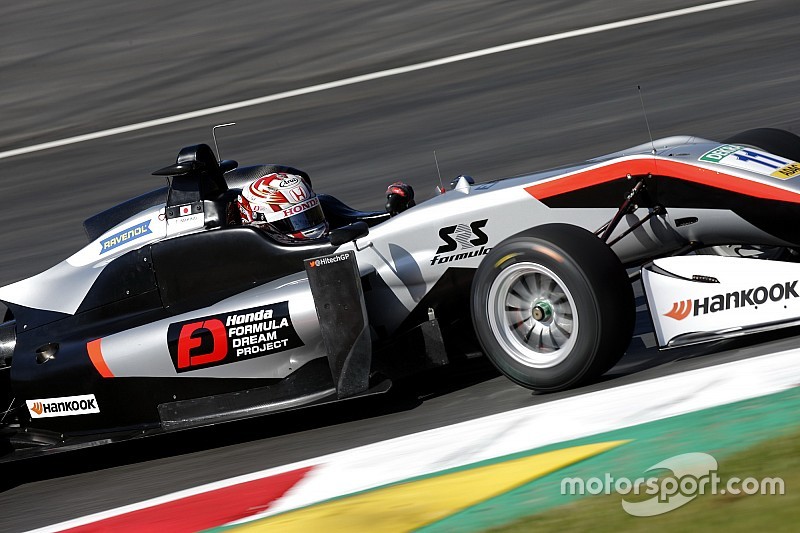 European Formula 3 rookie Tadasuke Makino, who is supported by Honda, says his goal is to reach Formula 1 "in two or three years".

Makino, 19, made his car racing debut in the Japanese F4 championship two years ago, and missed out on the title by three points.

He stepped up to Japanese F3 last year with Toda Racing, and finished fifth with four podiums and a pole position.

In addition, he took part in four Super GT races, three of them in the GT500 class with a Honda NSX, and scored a second place at Buriram.

Following his impressive rookie season in Japanese F3, Makino became the latest youngster to be picked by Honda to race in Europe, following in the footsteps of Nobuharu Matsushita and Nirei Fukuzumi.

With Honda supporting him, Makino confirmed his goal is indeed making it to Formula 1 once he collects enough FIA Superlicence points, which he hopes to do in two or three years.

"Formula 1 is the goal, but I need Superlicence points, this is really important," Makino told Motorsport.com. "I get the Superlicence and after that obviously Formula 1, [in] two or three years."

While Makino already has a year of experience with the Dallara F316 in Japan, the 2017 European spec car will use an updated aero kit.

Makino said that while the difference between the levels of downforce is making his transition a "bit difficult", his experience with the GT500 car, which has more downforce and engine power, is helpful.

"Yeah, [the new] car was a bit difficult because F3 this year is changing a little bit with the regulations [regarding] downforce, but engine power is the same.

"The GT500 had more power and downforce, but weight is a bit different with GT500, more heavy, but the feeling is okay I think."

While he already raced against the European F3 competition once last year in Macau, where he was 14th out of the 22 finishers, Makino is set to make his European racing debut in two weeks' time at Silverstone.

"I'm really excited," he said. "It is my first time in Europe, but last year I raced in Macau and some people I raced with [were the] same, but yeah in Europe I will race for the first time.

"It will be really difficult, and the European F3 series is really hard compared to Japanese championship. It's more fun, so I really enjoy it, and we will see at Silverstone I think."

Van Amersfoort: F3 and GP3 merger would be "logical"