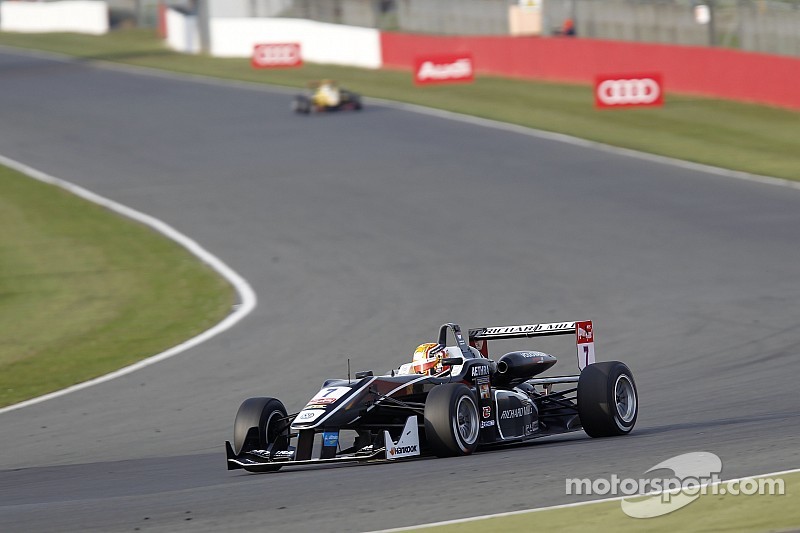 Charles Leclerc survived a late restart to claim his first European Formula 3 win in the third race of the weekend at Silverstone, the series debutant beating Antonio Giovinazzi by under half a second.

After being crucially beaten from pole to the first corner in Saturday’s second race, Leclerc made a much better getaway to lead from Giovinazzi at the start, the Van Amersfoort driver steadily pulling out a gap of just over a second in the opening laps over the field.

Carlin’s Giovinazzi began to close in as the race approached mid-distance, bringing the gap down to less than half a second at one stage after a small error by Leclerc, but was unable to find a way through as the Monegasque remained solid in his defence of the lead.

A late Safety Car to recover Pietro Fittipaldi’s stricken car threatened to give Giovinazzi another chance, but Leclerc once more absorbed the pressure after the restart in a manner that belied his status as a F3 rookie to secure his maiden win in the category by 0.446s.

Behind, Prema’s Jake Dennis took advantage of the caution period to deprive Gustavo Menezes of the final podium position once racing got back under way, the American having made a lightning start to jump from eighth on the grid to third after the opening sequence of corners.

Once again forced to fight his way through from last on the grid, Felix Rosenqvist once again made incisive progress from 35th place on the grid. By the time of the Safety Car the Swede was up to 13th, although late contact with Nabil Jeffri dropped him to 15th before he finally recovered to finish 12th.

Rosenqvist’s Prema teammate Lance Stroll was an early casualty, the young Canadian spinning into retirement on the opening lap at Luffield having jumped the start.

Stroll: No pressure being a Ferrari driver