Max Verstappen claimed the pole positions for the two races on Sunday.

Max Verstappen (Van Amersfoort Racing) currently is in great shape: first of all, he won the 16th season round of the FIA Formula 3 European Championship at the 2.3 kilometres long Norisring. Then, in qualifying a few hours later, he claimed the pole positions for the two races on Sunday. For the 17th race of the season, Esteban Ocon (Prema Powerteam), Tom Blomqvist (Jagonya Ayam with Carlin) and Felix Rosenqvist (kfzteile24 Mücke Motorsport) will line up behind Verstappen. For the 18th race, Blomqvist, Rosenqvist and Ocon will be on the first two rows of the grid behind Verstappen. 16-year-old American Santino Ferrucci (Euro-international), who only has his second race weekend in the FIA Formula 3 European Championship in Nuremberg, shone with fifth and sixth place. 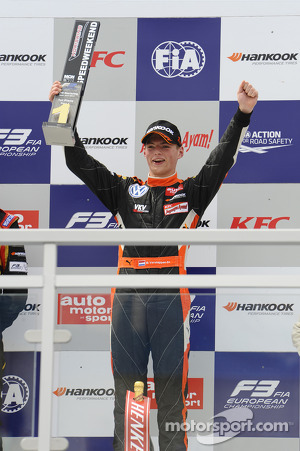 Dutch driver Max Verstappen (0:48.118 minutes), who had won the first race of the weekend in the morning, again showed a convincing performance in second qualifying. As a slight drizzle came down at the start of the session, all drivers went out onto the track immediately. Seven minutes into the session, Verstappen moved up to the top of the time sheet and stayed there. The fact that the rain got stronger also helped the 16-year-old: from the halfway point, the rain got so heavy that all drivers came into the pits. Only a few minutes before the end of the session, some drivers went out again with rain tyres. On a wet track, no fastest lap times were achieved.

Max Verstappen (Van Amersfoort Racing): “Because of the weather, qualifying wasn’t easy. It was clear to me that we had to set a fast lap time at the very beginning as rain threatened to increase, and that was exactly what happened. At the end, I did a few laps with rain tyres to get to know the track in the wet, too, because rain has been forecast for both races tomorrow.”