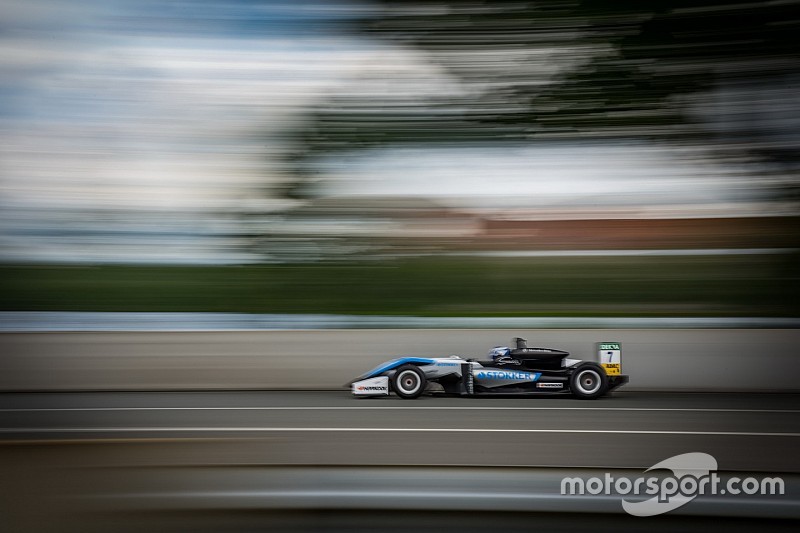 Ralf Aron set the fastest Formula 3 lap ever recorded around the Norisring to top the second qualifying session of the F3 European Championship round on the Nuremberg street circuit.

The Estonian, for whom this was the maiden F3 pole of his career, headed Jake Hughes as Hitech GP locked out the top two positions.

But it was championship leader Maximilian Gunther, who celebrates his 20th birthday on Sunday, who emerged ahead on second-fastest lap times to claim pole for the third and final race of the weekend in his Prema.

The top positions changed constantly, and Jehan Daruvala looked on for a double pole going into the closing laps of the session, but a late flurry of improvements relegated the Force India protege to fifth behind Carlin teammate Lando Norris.

Aron paid tribute to the Hitech team, which also claimed race-one pole with Hughes before he was eliminated in the race in a collision with Norris.

“This weekend we didn’t start off well in free practice, but we figured out what we needed to do and it was really good in Q1, but on my fastest lap I made a huge mistake in the last corner and I couldn’t repeat a good lap," he said.

“The car felt mega this afternoon – I’m really proud of the mechanics and engineers, because none of us was in the top 10 in free practice and we worked it out.”

While Aron got a useful tow from Ferdinand Habsburg, Hughes had none at all.

“I’m really happy for Ralf,” he said. "I wasted five minutes trying to get a tow, and that dropped the temperature out of the tyres, but my lap was really good – my best one in a while.”

With Aron and Hughes dropping to third and fourth respectively for race three, Gunther lines up on pole, with Daruvala alongside.

“Winning race one was really good but I knew the most of important event of the weekend is Q2 because it decides a lot,” said the German.

“I did two really good and clean laps without any mistakes.”

A last-lap improvement gave Van Amersfoort Racing’s Pedro Piquet sixth fastest, ahead of the Prema car of Callum Ilott, but Ilott will take a five-place grid penalty for colliding with Keyvan Andres Soori in race one while trying to unlap himself.

Tenth should be Ferdinand Habsburg, but he also has a grid penalty, in his case three places for a clash with David Beckmann in the first race.

That means that Joel Eriksson, mysteriously off the pace again in his Motopark car, takes the final slot in the top 10.

For race three, Habsburg and Norris start on the third row, Zhou and Mazepin on the fourth, and Ilott and Eriksson on the fifth.

Norisring F3: Norris charges from fifth to first in Race 2