Norris explains why he chose McLaren over F1 rivals 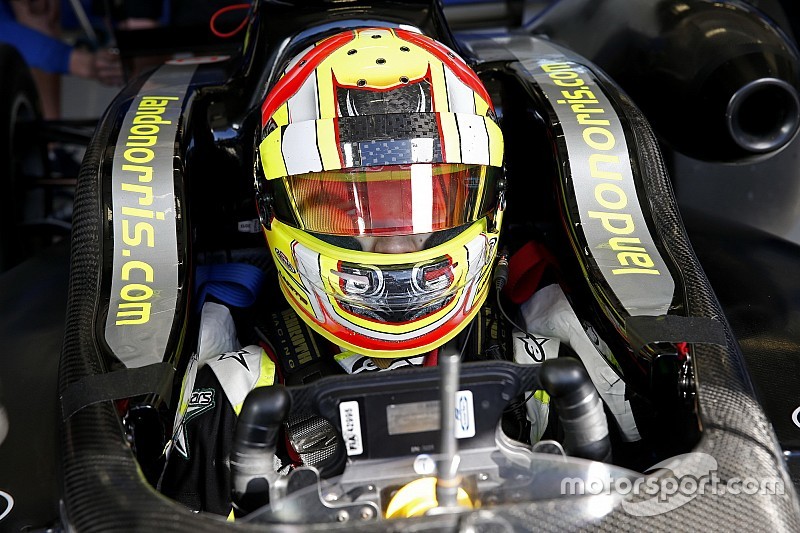 McLaren junior Lando Norris says he chose to link up with the Woking-based team because of the opportunities it could offer, the Briton having also had talks with Mercedes, Red Bull and Renault.

He won the McLaren Autosport BRDC Award back in December and was rewarded with a simulator role and a test - set for later this year - with the F1 outfit.

The highly-rated 17-year-old Bristol native was then announced as part of the McLaren junior set-up in February.

Elaborating on the move, Norris told Motorsport.com: “We had a few discussions with a few teams – Red Bull, Renault and Mercedes.

"It wasn’t so much on just wanting to get on a junior programme, it was more about getting to know what they could offer and what opportunities they could offer in the future. In that sense, McLaren was by far the best.

“I’m not saying the others are bad, but McLaren being based in England is a huge positive, and they have more opportunities for the future. If Honda were to get more teams, I’d like to say that could open up [some chances].”

The Briton is one of the three drivers in the Woking team's 2017 junior line-up, with long-time McLaren man Nyck de Vries and Honda protege Nobuharu Matsushita also featuring.

De Vries and Matsushita will race in F2 in 2017, while Norris will contest a rookie season in European F3.

Quizzed on how the McLaren programme different with the well-renowned Red Bull Junior Team scheme, Norris said: “With Red Bull, it doesn’t seem like the drivers have the most control over what goes on - Helmut Marko obviously plays a huge role in deciding who does what and where.

"They have two teams [in F1], but unless you’re the next [Max] Verstappen, you’re not going to put straight in a Red Bull seat.

“McLaren has the best record of getting young drivers into F1, they have a programme for them in terms of the sim, physical training, getting to know the engineers and everything.

"Whereas it seems, in some of the others, there seems to be less interaction. You have the name ‘young driver’, and that's more or less it.

“McLaren offer a lot more, and believe in their drivers when they have the chance to get to F1.”

Since 2014, McLaren has promoted two junior drivers to F1 seats in Kevin Magnussen and Stoffel Vandoorne. Magnussen moved up after taking the 2013 Formula Renault 3.5 title but only remained a McLaren F1 race driver for a year, while Vandoorne was handed the opportunity a year on after his GP2 success.

Norris will contest his first full European F3 campaign with Carlin, and he believes that he will have a challenging time going up against third-year drivers Maximilian Gunther and Callum Ilott – who are both racing for the Prema outfit that has gone unbeaten in the series since 2010.

“I definitely think Prema [are favourites] with Ilott and Gunther, who is the highest-ranked driver from last year," said Norris. "He’s got a lot of experience, as well as Callum, and they’re both in a good team.

“I expect a lot from them, it’s their third year - and if I was in my third year, I would be aiming to dominate the championship.”

Norris is well aware, however, that his previous record means much will be expected of his first F3 season – whether that be a title run or a “more realistic” top-three finish.

“Carlin isn’t the best team at the moment, we’re not yet at the same level as Prema - hopefully that will change,” he said.

“I might not be winning the first races of the season, but in the long run we can improve more and that’s when people can expect more wins. I’ll give it my best, that’s all I can do, and whether people expect me to win everything is up to them.

“It’s a strong, dense field. We’re talking more about thousandths [of a second] than the tenths I had in Formula Renault.”

F3 preview: Will 2017 be the year Prema domination ends?