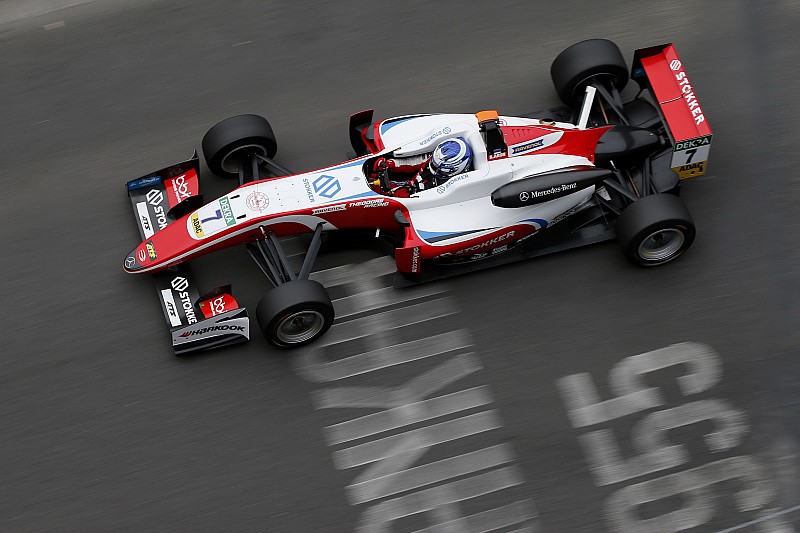 Third-year Formula 3 European Championship racer Ralf Aron has taken victory in the Pau Grand Prix, which featured just eight laps of racing before it was stopped due to a downpour of rain.

The Estonian’s victory in his Prema Powerteam Dallara-Mercedes counts for half-points only, as the race had not reached 75% distance.

The key to Aron’s victory was a superb start on a circuit that got considerably wetter during the formation lap, as the rain began to fall more heavily.

Aron burst through from third on the grid to beat wheelspinning poleman Enaam Ahmed into the first kink, while Ahmed’s Hitech GP teammate Alex Palou stalled from the other front-row position.

Aron kept reigning BRDC British F3 champion Ahmed at arm’s length over the eight laps of racing before the safety car was called.

This was due to a crash on the pit straight involving Marcus Armstrong and Ferdinand Habsburg as they ran 10th and 11th respectively.

While the marshals cleared the wreckage, the rain became torrential, leading to the decision to suspend the race – with no improvement likely for over an hour, the race has been called and a result declared.

“The start was great, the car was really good and I’m really confident in changing conditions,” said Aron.

“It was hectic for us because I went out on slicks because we thought it was going to dry out.

“Then on the grid I was screaming, ‘The clouds are coming, put on rains’, and then I had to try to get them warm on the formation lap.

“I’m a little bit bummed that we couldn’t get full points – the team deserved it.

"In my opinion we could have done two more laps under the safety car – we were close to 75% distance.”

Daruvala completed the podium, but had a nervy race after clipping a cone at the final chicane, mindful of his first-race suspension failure.

Second-race winner Sacha Fenestraz was the only driver to take the start on slick tyres, but the worsening rain on the formation lap doomed his decision, and after getting to the first corner in fifth place he pitted for wet-weather rubber.

Due to the half-points, Fenestraz retains a championship lead he would have lost to Aron had the race gone full-distance.

Red Bull Junior Dan Ticktum, who had suffered brake-bias problems in qualifying, ran a distant fifth, with Prema duo Robert Shwartzman and Mick Schumacher behind him.

Jonathan Aberdein (Motopark) and Ben Hingeley (Hitech) were eighth and ninth, while the Armstrong/Habsburg incident promoted Motopark’s Marino Sato to the final half-point.

Armstrong had been seventh at the first corner, but clouted the barrier exiting Gare and lost positions.

Palou had insult added to injury when, running outside the points, he was given a drive-through penalty for being out of position when he stalled.

Has the new Norris already emerged?