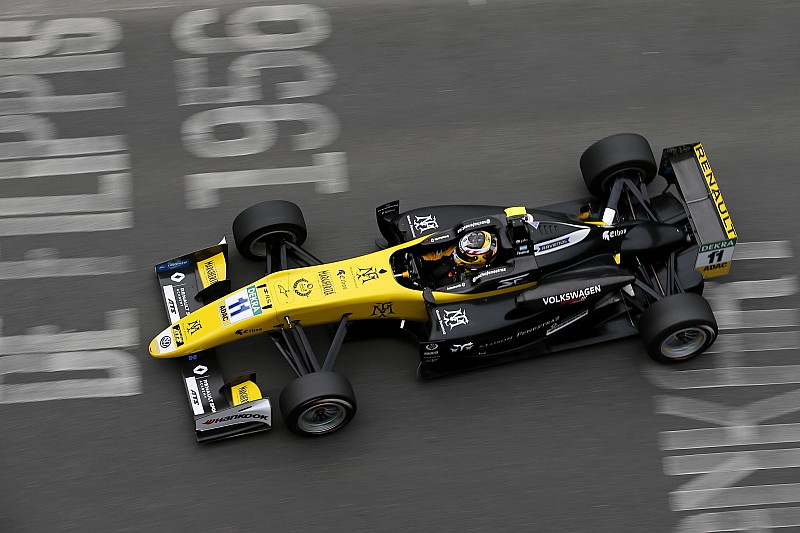 Renault F1 junior Sacha Fenestraz survived contact in the dramatic second race of the Formula 3 European Championship opener at Pau to take victory and move into the points lead.

Fenestraz’s Carlin Dallara-Volkswagen came under intense pressure over the first half of the race from surprise package Fabio Scherer.

The Swiss Motopark driver, a graduate of German Formula 4, was glued to Fenestraz for the first couple of laps before the leader inched out at advantage.

But then the safety car appeared, when Devlin DeFrancesco and Artem Petrov tangled at the Pont Oscar left-hander.

Scherer anticipated the restart perfectly, and tried to pass Fenestraz around the outside of Gare, but the crowd favourite remained in front.

A short shower of rain made life difficult for Fenestraz in judging the conditions, Scherer drawing alongside at the Lycee hairpin as Alex Palou in turn latched his Hitech GP car onto the leading duo.

Things came to a head on the 14th lap, just as the rain had passed, when Palou feinted a move on Scherer at Lycee.

Scherer darted to the inside and covered off Palou’s path, but his line carried him into a collision course with Fenestraz, his left-rear wheel riding over the right-rear of the leader.

In a chain reaction, Scherer was also clipped by Palou, the Catalan sustaining minor damage to his front wing.

“It’s one of the hardest races I’ve ever done, with rain in the middle – it was tricky with some big moments, and I nearly put it in the wall,” said Fenestraz.

Of the contact with Scherer, he said: “I was quite scared.

“It was quite a big contact, but luckily I didn’t have any damage – the car was faster [afterwards]!”

Marcus Armstrong, the only Prema Powerteam driver to make the best of the rainy conditions in qualifying, completed the podium, despite almost getting collected by the ricocheting Scherer shunt.

Fourth place was the subject of a dispute between Hitech’s British duo Ben Hingeley and Enaam Ahmed.

Ahmed had made a lightning start from third on the grid to draw alongside Fenestraz at Gare corner, but he was stuck on the outside line.

Scherer and Palou swept through on the inside, while Hingeley tripped over the recovering Ahmed, allowing Armstrong to leapfrog both.

Hingeley did a sound defensive job thereafter to beat Ahmed, with Carlin’s Jehan Daruvala shadowing them in sixth.

Julian Hanses also put in a great defence, after his putting his car – run by the tiny Ma-con team – on the fourth row.

The German held on for seventh, with a snaking train of expected title contenders Ralf Aron, Robert Shwartzman, Mick Schumacher, Ferdinand Habsburg and Guan Yu Zhou swarming around in his wake.

Dan Ticktum dropped out of this group when his headrest came loose and he was called in by the black-and-orange flag.